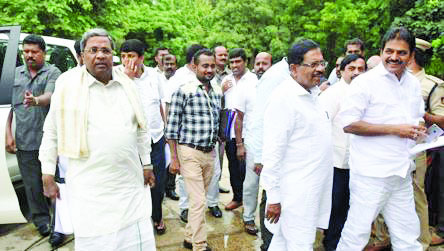 SPEAKER SUPREME: The Supreme Court has held that the rebel MLAs cannot be forced to attend the assembly in Karnataka where 15 Congress MLAs and 10 JDS MLAs have defected, destabilising the Kumaraswamy government

In the light of recent developments in Karnataka and Goa the writer explains what will attract disqualification despite all the attempts under the peoples representation act to prevent MLAs from jumping around like monkeys.

A month before 10 of 15 Congress MLAs in Goa joined the ruling BJP, 12 of 16 Congress MLAs in Telangana had ‘merged’ with TRS. How does India’s anti-defection law deal with such cases? A veteran of parliamentary affairs looks at the provisions of the law, and how far it has achieved its goal over the years.
Q. When was the anti-defection law instituted and what was the trigger?
The anti-defection law is contained in the 10th Schedule of the Constitution. It was enacted by Parliament in 1985. It came into effect on 1st March 1985.
For a long time, the Indian political scene was besmirched by political defections by members of the legislature. This situation brought about greater instability in the political system. The infamous “Aaya Ram, Gaya Ram” slogan was coined against the background of continuous defections by the legislators. Legislators used to change parties frequently, bringing about chaos in the legislatures as governments fell. In sum, they often brought about political instability. This caused serious concerns to the right thinking political leaders of the country.
Several efforts were made to make some law to curb defections. Starting from private members’ efforts, Bills were brought in by the government at different times. No Bill could be passed because of one reason or the other. However, the most important reason was that there was no consensus on the basic provisions of an anti-defection law. Members of Parliament were concerned about the freedom of speech in Parliament and other legislatures as they had a fear that too stringent a law on defection would likely curb the freedom of speech (which is a constitutional right) of the legislators. A lot of time was taken before a consensus could be reached on this issue.
Finally, in 1985, the Rajiv Gandhi government brought a Bill to amend the Constitution and curb defection. The 10th Schedule of the Constitution, which contains the anti-defection law, was added to the Constitution through this amendment.
Q. What is the purpose of the anti-defection law? What are the grounds of disqualification?
The purpose, as is obvious, is to curb political defection by the legislators. There are two grounds on which a member of a legislature can be disqualified.
One, if the member voluntarily gives up the membership of the party, he shall be disqualified. Voluntarily giving up the membership is not the same as resigning from a party. Even without resigning, a legislator can be disqualified if by his conduct the Speaker/Chairman of the concerned House draws a reasonable inference that the member has voluntarily given up the membership of his party.
Second, if a legislator votes in the House against the direction of his party and his action is not condoned by his party, he can be disqualified. These are the two grounds on which a legislator can be disqualified from being a member of the House.
However, there is an exception that was provided in the law to protect the legislators from disqualification. The 10th Schedule says that if there is a merger between two political parties and two-thirds of the members of a legislature party agree to the merger, they will not be disqualified.

Q. Has the law changed since inception, and if so, how?
Yes, the law was amended in 2003. When it was enacted first, there was a provision under which if there occurs a split in the original political party and as a result of which one-third of the legislators of that party forms a separate group, they shall not be disqualified. This provision resulted in large scale defections and the lawmakers were convinced that the provision of a split in the party was being misused. Therefore, they decided to delete this provision. Now, the only provision which can be invoked for protection from disqualification is the provision relating to the merger, which is provided in Paragraph 4 of the 10th Schedule.

Q. How far has the law succeeded in achieving its goal?
The law certainly has been able to curb the evil of defection to a great extent. But, of late, a very alarming trend of legislators defecting in groups to another party in search of greener pastures is visible. The recent examples of defection in state Assemblies and even in Rajya Sabha bear this out. This only shows that the law needs a relook in order to plug the loopholes if any. But it must be said that this law has served the interest of the society. Political instability caused by frequent and unholy change of allegiance on the part of the legislators of our country has been contained to a very great extent. That is a story of success of one of the most important legislation that the Indian Parliament has enacted.

(The writer is a former secretary general of Lok Sabha)