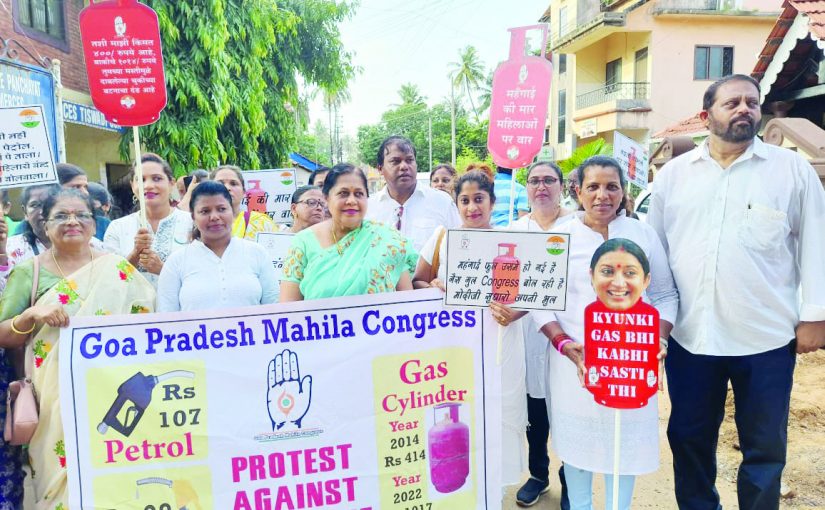 GAS HIKE: BJP SARKAR ONLY FOR RICH PEOPLE! The Goa Pradesh Mahila Congress organised a protest against LPG price hike near Velim market on May 23, 2022. Participating alongside Mahila Congress were PCC office bearers, Youth Congress Seva Dal and NSUI members. According to GPMC president Beena S Naik inflation is spiralling of control and the common people of Goa are feeling it and suffering – the runaway price hikes all around, “This government only knows how to loot the people!” Will this heartless government do anything to ameliorate the plight of women who have a household to run? LPG price hike has touched the sky at Rs1,017 currently.

MY association with Public Interest Litigations (PILs) goes back to over four decades. By petitioning relevant authorities, moving the High Court and even knocking on the doors of the Supreme Court, I have succeeded in taking up various issues of public interest. I feel humbled that some of my PILS have impacted civic and political life in Goa. It has been worth battling it out as my efforts have not been in vain.
My debut in public life began in 1979 when I was very privileged to be part of that 12-day very vibrant and successful State-wide student agitation demanding a blanket 50% bus concession for all students.
Over the years, I have never hesitated to take on the powerful and mighty over a wide range of issues. From senior politicians to well-connected bureaucrats, I have not shied away from tackling them head on. In taking up social causes, one has to be ready for harassment and retribution by the government of the day. I have faced it all during the Congress rule and now under the BJP regime nothing has deterred my commitment and pledge to fight fearlessly. While penning down my memoirs, the chapter on all those PILs will definitely be a very long one.
— Aires Rodrigues, Ribandar

TEMPLE POLITICS
CM PRAMOD Sawant was officially chosen to look after the basic needs of Goans and to work for the all-round development of Goa. Unfortunately, Sawant is currently heard talking not of fighting poverty, unemployment, corruption or of constructing houses for Goans living below the poverty line but of rebuilding imaginary ancient temples destroyed long ago by the Portuguese colonial regime and its crusaders. The CM wants to be like a big historian, if not like a hired contractor of a particular community and the Sangh Parivar in Goa! The excuse he is heard giving today for doing so is because he wants to revive the preserved culture of this state.
It looks like our RSS-trained CM wants to somehow keep our dumb “succegaad” Goans fully busy/distracted by making them fight against each other, concentrating on silly unimportant religious- centric issues of the past — playing UP-type communal hate politics for his own long-term political survival in Goa.
If Sawant is so interested in reviving the “preserved” culture of the state then why is he not keen on shutting casinos, dance bars, prostitution centres, drugs/liquor supplying outlets, etc, on a top priority basis in Goa? Why is he still backing the three controversial linear projects (including some big projects of builders/real estate lobby) and openly supporting the ongoing destruction of Goa?
Our tiny state needs better hospitals, schools, colleges, roads, streets, bus stands, market places, and useful utilities in Goa to improve the quality of life of the common people. Instead of thinking temples all the time CM should think education, health, employment, economy, common sense… to really improve living conditions of Goans. I hope better sense prevails. Long live secular Goa and Goan unity. Viva Goa. Viva Goenkaar!
— Jerry Fernandes, Saligao

GOA NEEDS A FUTURE GENERATIONS ACT!
IIT was the first day of the SSC “prelims,” 1999. While the rest of us were frantically revising, a boy from Porvorim sat there with a glazed, almost catatonic look in his eyes. I asked him why he wasn’t studying and he bragged that his friends and he had spent the previous night at an acid party, smoking an entire tola of hashish. He said he couldn’t care less about the prelims and we were shocked at his devil-may-care attitude.
Fast forward two years and I, the last of 40 of my friends to experiment with drugs, was sitting listlessly at an HSSC Board exam, waiting for an hour to lapse so I could leave the exam hall. I too hadn’t a care in the world, and lived for the glittering night life in the Calangute belt.
I recently got word that a local youth drunk himself to death. I hadn’t met him for months and used to beg him to admit himself to a rehab for his drinking problem. Once a witty, hardworking and spry young man, his addiction had aged him horrendously: drinking from daybreak finally did him in and Goa’s cheap spirits had claimed another young life, at least the sixth I’ve witnessed personally.
Twenty years ago casinos were invited by the Goa government, ostensibly for the pleasure of tourists, and this opened up a whole new can of worms, particularly for the future generations of Goans. Casinos worldwide are synonymous with money laundering (proceeds of crime and politically exposed persons) terrorist financing, drug dealing, spiking of women’s drinks, prostitution, paedophilia, organised crime, assault weapons and bankrupting families.
Goa’s existing sin industries (cheap alcohol and psychotropic drugs) have gained nigh sacrosanct status. Reining in sales of alcohol is unthinkable, ditto a blanket ban on illegal raves and their politically backed counterpart, EDMs. But the entry of gambling solely for guests demands the adoption of an opposing system of checks and balances, with the futures of Goa’s unborn generations taking precedence.
Whilst the world stares with faint hearts at the antics of toxic male leaders, visionaries from Wales and NZ have begun works that are as revolutionary as those of Gandhi, Martin Luther King Jr and John Lewis. Jacinda Ardern, Sophie Howe and Dr Katherine Trebeck work tirelessly to ensure freedom, respect and equal rights are accorded to those once thought undeserving of the same. Ardern is working on a slew of projects to protect NZ’s potable water (the purest in the world), the mental health of citizens and indigenous peoples and is taking on smoking with a step-by-step eradication programme.
A local version of the Future Generations Act is absolutely necessary for critically endangered Goa and unlike the UN’s SDGs, the works of the Act are quantifiable. With the pace of IT innovation, the recent union budget allocation for digital infrastructure transformation and an upright legal luminary like Carlos Ferreira, Goa can have her own version of the act before the current government term ends.
Dr Claude Alvares, Abhijit Prabhudessai and Rajendra Kerkar deserve to be at the helm of Goa’s planning, not running themselves ragged putting out fires started by incompetent feudal lords/dons/goons and worse. With pressure from the public, we might even go a step further and limit MLA reigns to two terms, curtail their royal expense accounts and fine them for blurbs/threats/gaffes.
The failure to act now will result in a Goa of tomorrow that will be unrecognisable: with shootouts using assault weapons, barren fields and festering rivers.
—Chris Fernandes, Miramar