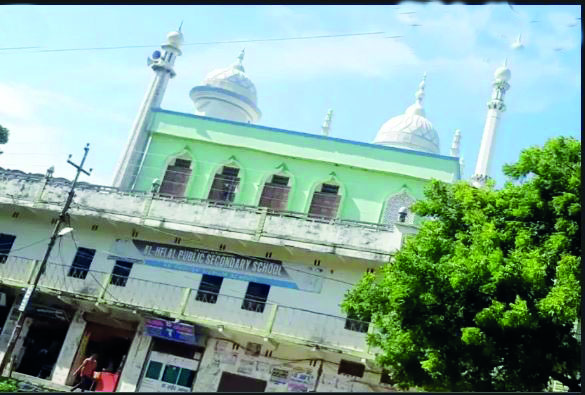 Influx: Following large scale migration of Muslims a number of mosques and madrasas have come up on the Nepali-Tibetan border areas

In what has historically been considered a Hindu state, a number of mosques and madrasas have come up on the Nepal border. Apparently, this is due to mass migration of Muslims from Burma

Several recent reports have shown that demography is changing rapidly along India’s border with Nepal. The number of mosques and madarsas is constantly increasing. From August 20 to 27, 2022, an OpIndia team visited several areas in Nepal bordering India to observe the ground situation. What follows here is the fifth episode of the series of reports documenting the facts noticed by the OpIndia team.
While travelling along the Indo-Nepal border, the OpIndia team continued hearing the Tharu tribe’s name from villagers every now and then. We learnt that the Tharu tribe, who are followers of Hinduism, is indigenous to both the Terai region of southern Nepal and northern India.
We were told that the Tharu tribe has, to date, kept its old culture and traditions intact in their original form. To put all of this to the test, we travelled to Mohkampur, a Tharu tribe village on the Jarwa border of Nepal, which had a total population of roughly 3500 people.
Mohkampur is located in the Jarwa police station jurisdiction of the Balrampur district, around 15 kilometres from the main market of Tulsipur. After this village, the forest area begins, and after some distance, the Nepalese border appears.
While we were heading towards the village, at its entrance, we came across a signboard that read, ‘Late Shri Kanhaiyalal Smriti Dwar’. A paved road led us to the village. As we entered we saw some local villagers sitting in the chaupal (a common area in the village where villagers congregate to discuss their issues) in front of Khem Singh Rana’s house in this village and chatting. We too stopped by and started conversing with them.

‘Our ancestors fought for Maharana Pratap’
While conversing with us, Khem Singh, one of the villagers, described themselves to be the descendants of Rajput warrior king Maharana Pratap. Khem Singh proudly that his ancestors fought against the Mughals along with Rana Pratap to save the country and religion.
Khem Singh recalled how their ancestors took refuge in hilly and inaccessible areas to save their religion from the Mughals after their king Maharana Pratap died. Khemu also confirmed that a significant number of people of the Thari community are now residing on the Nepal border.

Muslim population has increased manifold in the border areas
Khem Singh stated that he had lived in the border village of Mohkampur since birth. According to him, the population of Muslims on the Nepal border has increased significantly over time.
Rajesh, the Kotedar of the same hamlet and of the Tharu tribe, told us that Muslims entered India through Nepal and settled after purchasing land, etc. The Mazars, according to Rajesh, are old, but the madarsas are newly built.
Devsharan of the same village and community also stated that the Muslim population has grown in recent years so has the emergence of mosques and Mazars in the border areas.
Manoj from the adjoining hamlet agreed with the media’s claims of a rising Muslim population on the Nepal-India border.

3 mosques and 1 madrasa in the gram sabha, Tharu community village head named Shakeela
Concerned about the growing hegemony of Muslims in the area, locals speaking at the Chaupal claimed that, despite the area being primarily dominated by people of the Tharu community, the village head there was a Muslim named Shakeela. They further informed how the candidate who had stood second, also belongs to the Muslim community.
The villagers present there further described the Tandwa and Shekhdih villages in the vicinity are Muslim-dominated areas. Locals further indicated that there were previously incidences of theft reported on roads and residences in the region, but that since the Yogi government arrived, the crime has stopped. Khem Singh claimed that incidents of love jihad are also reported from time to time.
We were told that there were almost 2000 Muslims living in the entire gram panchayat of Mohkampur, an originally Tharu tribal village. Besides, we also learned that there are as many as three mosques and one madarsa in the vicinity. The mosque, however, was not visible in the Tharu-dominated neighbourhood. People were spotted worshipping Lord Shiva in this area.

Women are safe under the Yogi government
Khem Singh compared the village’s law and order situation under previous regimes to that under Yogi Adityanath. He claimed that the village’s women were previously unsafe. The villagers had to protect their daughters and sisters on their own before Yogi Adityanath’s regime, but that is no longer the case. Other locals there attested to what Khem Singh said. They, too, agreed that no one would dare to look at the girls in their homes anymore.
Speaking on the issue of security and development, Rajesh, Devsharan, and Khem Chand stated in unison that the Tharu tribe has been heard at the governance and administration levels since the Yogi government came to power. Khem Chand asserted that they are currently not discriminated against and receive full benefits from all government programmes. He stated that he is now reaping the benefits of all the schemes. Everyone present agreed that their community had previously been disregarded by the previous government and left to fend for themselves during those days.
Khem Singh told us that the Tharu tribe supports their families through hard labour and farming. According to Rajesh Kumar, the number of Tharu people in government employment is quite low. However, the people present there told us that the situation in the village is gradually improving. The current generation is also completing Intermediate and Graduation and focusing on their education.
Leftist Movement and Indian Security Forces in Nepal
Everyone in Kotedar Rajesh’s chaupal concurred that during Nepal’s Left movement in the 1990s, bombs could be heard in their village. While they saw the carnage from a distance, the villagers were confident of the strength of the Indian soldiers stationed on the border. Everyone agreed to the bloodshed and commotion that took place on the other side of the border.
The locals of Mohkampur told us that during the Left-wing violence, many injured Nepalese soldiers crossed over to the Indian side to save their lives. Villagers recounted that the Indian forces not only rescued their lives from the Maoists but also provided all possible assistance by treating the injured. According to Khem Singh, the Nepalese border coal market has remained desolate since the attacks.
The Tharu tribe was highly pleased with the behaviour of the paramilitary SSB (Sashastra Seema Bal) men stationed on the border. The villagers referred to the SSB jawans as their brothers. Along with this, the locals said that the district police’s demeanour towards them had changed under the Yogi administration.

Mumtaz Ali seen selling clothes on his bike
One Mumtaz Ali was seen selling clothes on a bike in the same neighbourhood as we were reporting. Mumtaz had a lot of items stashed on his bike. He identified himself as a native of the Uttar Pradesh district of Sitapur, which is 200 kilometres away from this particular village. He stated that he had rented a room in the adjacent bazaar of Tulsipur. Mumtaz estimated the total value of the products kept on his bike to be roughly 25,000 rupees. He explained how he transported bulk products from Sitapur and sold them across the border.
‘Anti-national elements exploit Tharu people’s poverty,’ BJP MLA
Kailashnath Shukla, a BJP MLA from Tulsipur in Nepal’s border region, stated that anti-national elements often take advantage of the Tharu people’s poverty and poor education levels. He also stated that his BJP government is monitoring the situation.
A creeping Islamisation of Nepal and its border areas appears to be underway, with Islamists steadily establishing their foothold in distant villages, including those on the Indian border. In the first four parts of this series, OpIndia documented the demography change ongoing in Nepal, as well as the worrying surge in the number of mosques and madarsas in the Himalayan nation’s border villages. Additionally, we also spoke about the rising incidences of love jihad in Nepal, as well as its Delhi connection and smuggling and various other notorious activities that are threatening India’s border with Nepal.