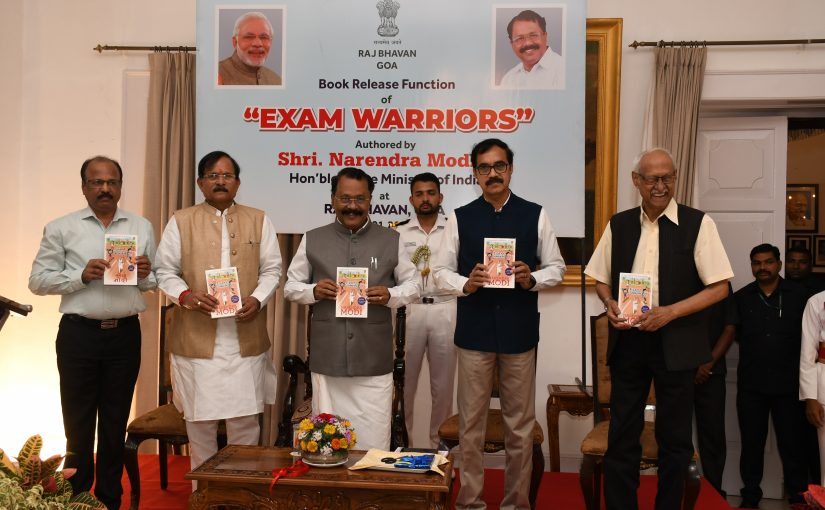 PRIME MINISTER NARENDRA MODI’S “EXAM WARRIORS BOOK”…was launched by Governor of Goa PS Sreedharan Pillai at the old Raj Bhavan Durbar Hall on January 19, 2024. The book takes an exclusive look at the students fraternity and has been published by the National Book trust with the support of the Ministry of Education (GoI). The ceremony was graced by Jnanpith Awardee Damodar Mauzo, Prof Harilal Menon (Vice-Chancellor of Goa University) along with other prominent dignitaries in the field of education and literature, students, parents, teachers of various institutions. Speaking on the occasion Governor Pillai appreciated the initiatives taken by Prime Minister Modi vis-à-vis exams-related issues. His advice to students was not to stress out during exams but to be exam warriors of confidence! The book with its questions and answers format will help them, so make use of it. He said nation building must come first and politics and other things second. Also present were
Union Minister of State, Port & Tourism  Shripad Naik and  Shiv S Shankaran. The first copy of the book was presented to Damodar Mauzo and the remaining copies were distributed to the students of Dr KB Hedgewar School, Cujira, Mustifund High School, Rosary High School, Our Lady of Rosary High School, People High School and Goa University students. First Lady Advocate Reetha Pillai was also present.

ANY legislation passed or notification issued must be for the larger public good and never for any vested interest.  The Goa amendment to the Indian Stamp Act, 1899 hurriedly introduced and passed has raised many eyebrows. It seeks to give reduction in stamp duty for gift deeds in favour of a brother-in-law (bhauji) or sister-in law which defies logic. We will soon know for whose benefit this is being done.

Similarly, on  January 17, 2014 the BJP hurriedly issued a notification appointing all sub-registrars in Goa as “Marriage Officers” under Special Marriage Act 1954 to solely facilitate a high profile marriage. It was the first and the last marriage in Goa under that Act.

The assembly is the democratic forum where elected representatives must hold a debate and discussion on intricacies of government policy while enacting only good new legislation. As any legislation that is enacted has far reaching effects on the State and its people, there must be a detailed and thorough debate on the pros and cons of every law that is contemplated. Curtailing debates and bulldozing legislations is very high handed and does not augur well in the framework of democracy.

Even worse, it erodes public trust in government and good governance, as they rightly question the efficacy and integrity of such rushed or ill- considered legislation and the motives for circumventing due process and debate.

THE majority if not all the fancy hillside residential complexes  (with scenic views) in Taleigao, Nagalli hills, Odxel, Dona Paula, etc, have been constructed with the fantastic gravity fed drainage into the nearest fallow fields now choked with plastic waste, garbage, filth and sewerage. It is high time to stop this menace once for all.
Again, fields are being filled up to build illegal accommodation for migrants. Here there is no sanitation of any kind, to defecate, bathe and wash clothes…there is open contamination, plastics are burnt along with toxic waste. Tenant verification is something that is unheard of in Taleigao, St Cruz, Bambolim, Merces, Chimbel!

Thousands of migrants, identity unknown, live cheek by jowl here in Taleigao. A white paper is urgently required on this matter before things become too complicated. The government sleeps with its eyes open! How are Goans going to save their precious homeland of Goa which they love?

THE on-going assembly session is  turning into a state government sponsored ‘balcaoncho gozali’ (balcony talk) type of time-pass comedy show in Goa! In fact, Charlie Chaplin, oops Speaker Ramesh Tawadkar (who is actually supposed to officiate the entire proceedings single-handedly like one gutsy daring referee without taking any team’s side) is seen running the ongoing assembly session in a most biased manner, acting like a remote-controlled robot of the ruling BJP government in Goa.

He is repeatedly heard saying “Bhosunn Gheat” (sit down) to Opposition leaders and not allowing them to even raise some serious issues concerning Goans, or to expose the misdeeds of the ruling party leaders, to somehow defend the ruling BJP government!

What is worse is that Ramesh Tawadkar is seen allowing the ruling party leaders to even pass some controversial bills without discussion and ignoring objections raised by the Opposition side on the floor of the house in the Goa assembly.

If the biased Speaker wants to dance to the tune of all his ruling leaders to enjoy his own “ache-din,” then he should stop holding such one-sided assembly sessions for entertainment in future. It’s just waste of time and unnecessarily fooling Goans! Can better sense prevail?

IF the Mhadei Sanctuary and surrounding areas are declared as a tiger habitat than Mhadei waters will not be diverted to Karnataka. As the Wild Life Act gives primacy to a Protected Tiger Reserve. But certain greedy people do not want to declare a tiger habitat for Goa as it will curtail mining activities. Goans should prepare to forego water security!

STARTING tomorrow at 05.27 we will experience the aphelion phenomenon, where the earth will be very far from the sun. We cannot see the phenomenon, but we can feel its impact. This will last until August.

We will experience cold weather more than the previous cold weather, which will  have an impact on flu, cough, shortness of breath, etc. Therefore, let’s all increase immunity by drinking or taking lots of vitamins or/and supplements so that our immunity is strong.

So, the air is colder and the impact on the body is not good because it is not used to this temperature. For that reason, keep our health condition in order to stay healthy with such weather conditions…don’t let it be an excuse for the next phase of Corona! Please share this!