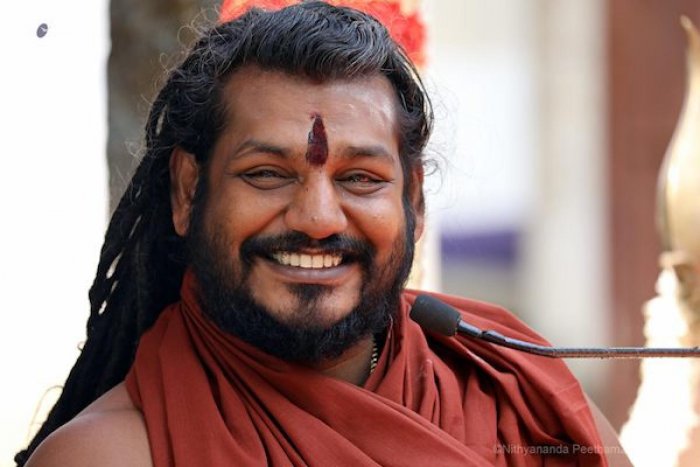 NOTORIOUS: Almost every godman in the country has been accused of rape including the highly revered Asaram Bapu, who is the guru of Kokilaben Ambani. Nithaynanda (above) is one of the most notorious abuser of women. Reportedly, he sends his victims abroad to avoid being arrested in India!

The notorious godman Nithyananda was arrested for multiple rapes and reported to have provided sanctuaries for his victims abroad.

The Gujarat High Court has pulled up the Union home ministry for failing to bring back two girls who are allegedly confined abroad by rape-accused and self-styled godman Nithyananda, reported Bar and Bench.
On Thursday, a bench of Justice NV Anjaria and Justice Niral R Mehta sought the Centre’s response in a plea filed in 2019 by the father of the girls. He sought their custody saying that they were forcibly taken by Nithyananda to an undisclosed location outside India.
“Even as the same [petition] comes up for consideration today after long drawn time, nothing has yielded,” the bench observed. “On the contrary, the state of affairs obtained could not be said to be welcome.”
In 2019, India had cancelled Nithyananda’s passport and also rejected his application for a fresh one. He is accused of abducting children and using them to raise money for his ashram. It was also reported that Nithyananda had found an independent country called “Kailaasa” near Ecuador in Latin America.
At Thursday’s hearing, the High Court noted that even though the home ministry was made a respondent in the case, it had not filed a response yet.
“The authorities are prima face seen to be falling short in performance of their duties towards investigation and to secure personal liberty of the corpuses [missing girls] and to address concern of the worrying father,” the bench said. “It is incumbent on the part of the authorities to file their affidavit in reply and to put forth their stand forthright indicating the efforts they had put in to trace corpuses.”
Senior advocate BB Naik, representing the girls, told the court that he had last communicated with them in April, reported Live Law. His submission came after the division bench asked Naik whether the girls could be contacted virtually to know their status and to ascertain their wishes.
The High Court will hear the matter next on February 6.