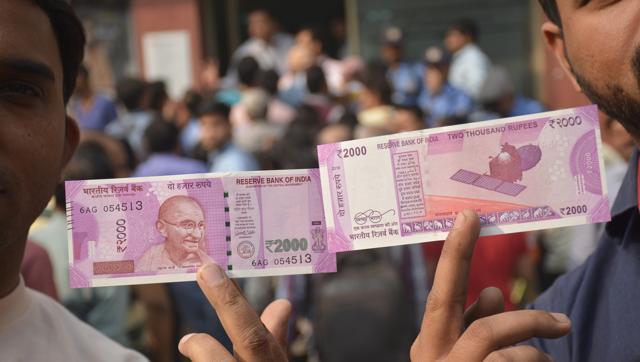 HAFTA: With the new `2000 notes, BJP bakths in government jobs will now demand a much higher bribe

And a few stray thoughts on the surgical strike conducted by prime minister Narendra Modi on aam aadmi pockets. In an unprecedented address to the country on national television at 8pm on Tuesday, Modi announced that from midnight on November 9 he was scrapping the `500 and `1000 notes in circulation. Notes of these denominations have been reduced to useless pieces of paper.

WHILE this will help fight black money, it is causing great inconvenience to the aam aadmi. Though the real targets are corrupt builders, businessmen and politicians with huge amounts of black money stored in denominations of `1000 and `500, the worst affected in the short run will be the commoners.

The worst part of this demonetisation is that you can exchange notes in banks only up to `4000 at a time. You can deposit any number of notes in your bank account, but you can only withdraw `10,000 in cash per person at a time, subject to maximum of `20,000 a month.

WHILE Modi has clarified that hospitals will continue to accept `1000 and `500 notes, you will however have to produce a recommendation from the doctor. You can also buy medicines from a government pharmacy provided you have a prescription. It is not clear if your existing `500 notes are accepted in private pharmacies.

Similarly, at least for the next 72 hours, petrol pumps will also accept your demonitised notes. Most have run out of `100 notes and you may not get change back. If you urgently need cooking oil or soap, your only option is the sahakari bhandars which will continue to accept these notes for a short while.

From December 31, 2016 banks will no longer exchange the demonitised notes and you will have to go to the Reserve Bank of India with your Aadhar and pan card. Your best option is to get a debit or credit card if you do not have one.

And a few stray thoughts on why right can be wrong. Dr Ganesh Devy, the distinguished linguist who has started a Jayprakash Naraian kind of initiative against Modi’s despotic regime, took strong objection to the Bharatiya Janata Party (BJP) being referred to as right wing. He insisted there was nothing right about what the BJP was doing, starting from the suppression of civil liberties to its economic policies.

Dr Devy pointed out that the expression ‘right wing’ was used for parties supporting capitalism in contrast to parties which supported labour (called left). Right wing parties believe that if industry was encouraged to grow by liberal tax incentives and other favourable policies, the benefits would percolate to the poor. The left, on the other hand, believes that the rich should be heavily taxed to force them to share their wealth with the poor.

An example of political right wing parties is the conservative party – called the Tories – in the UK. They believe in minimum governance, and that the government should encourage industry by keeping taxes low and creating a conducive investment climate. This is like Modi harping on improving the ease of doing business. On the other hand, the Labour party in the UK has always been committed to workers’ interests. It has been demanding greater social security for workers and senior citizens.

Similarly in the US, the Democrats represented by Hilary Clinton are considered sympathetic to labour and the poor while the Republicans led by Trump support industrialists. Clinton is in favour of increasing the taxes on the very rich to provide social security to the poor.

It was under Democratic president Barack Obama that millions of Americans received affordable health insurance. There are very few or no public hospitals in most developed countries where you can get free medical treatment. In the UK, everyone is entitled to health care under the National Health Service financed from workers’ taxes. A percentage of all salaries – even temporary – goes to social security and health care. The US does not have a national health scheme and everyone is dependent on insurance for treatment, which can be very expensive.

Clinton was in favour of regularising the status of illegal immigrants, particularly those whose children have automatically become citizens by birth. Trump thinks that immigrants deprive white Americans of jobs. He wants to build a wall between the US and neighbouring Mexico to curb illegal immigrants and drugs.

The expressions ‘right’ and ‘left’ in politics have nothing to do with morality. Dr Ganesh Devy’s logic is that it is blasphemy to use the word ‘right’ for the BJP which is doing everything wrong and harmful to the country. He believes that the BJP model of industrial growth favours big industrialists at the cost of labour.

THE BJP tried to pass a law to empower the government to acquire any land without the consent of the owner. The BJP is also in favour of replacing regular jobs with contract labour and giving industry the right to hire and fire when they please. In the name of improving the ease of doing business, the BJP has actually made it easier for companies to close down, depriving lakhs of workers of their jobs.

The bitter truth is that industrial growth shrank after the BJP came to power. There has been no sign of Modi’s achche din. It is now being admitted that the policy of globalisation has increased the gap between rich and poor. While there is no limit on the salary of a chief executive who is very often the owner, the government is reluctant to raise the minimum wage. So while Mukesh Ambani gives himself a salary of `100 crores a month, the Corporation of the City of Panjim does not want to pay garbage collectors even `15000 per month.

It is also perhaps necessary to clarify why the convention against oppression and suppression of freedom of speech is called Dakshinayam which literally means ‘south’. This does not imply that Dr Devy and the other liberal intellectuals are referring to the geographical south. He is using World Bank terminology. Historically, poorer countries were referred to by the word ‘east’ while rich countries were called ‘the west’. Before the end of colonisation, the richest countries like the US and countries in Europe were in the west on the atlas.

This is no longer true as China and India are now leading economic powers with a growth rate of eight per cent compared to a static or negative growth rate in the US and the UK. Ironically, the largest employer in the UK – which ruled India for 300 years – is the TATA Group. The expressions North and South are used now for rich and poor countries. South has become as a symbol of poverty and neglect, which is what the November 18 convention in Margao wants to draw attention to.

AND a few stray thoughts on the Union information minister’s decision to put on hold the ban on NDTV’s Hindi channel. The 24-hour ban is imposed on the excuse that the anchor disclosed strategic details when covering the militant attack on the Pathankot airbase which could have helped the militants. But NDTV did not reveal any information which had not already been made known by the army itself. Details of arms and aircraft in Pathankot were available on air force and defence websites. It is obvious that the NDTV has been singled out for punishment as other television channels and newspapers had also reported the same information.

The ban decision came nine months after the attack. It appears to be a reaction to the channel’s sober and objective coverage of the surgical strike against militants based in Pakistan. NDTV has only been guilty of questioning the use of the expression ‘surgical strike’ which defence minister Manohar Parrikar himself has admitted was misleading.

The channel has been only guilty of reporting that during Congress rule too similar retaliatory attacks were carried out by the army. NDTV is being blamed for permitting critics to question why Parrikar dragged Hanuman into the debate or gave credit to the Rashtriya Swayamsevak Sangh and not the soldiers.

PRESUMABLY the government is also angry that NDTV gave so much coverage to Rahul Gandhi and Arvind Kejriwal who were arrested for attempting to console the family of a retired jawan who had committed suicide to protest the delay of his pension and the failure to implement the One Rank One Pension (OROP) scheme. Senior defence officers have admitted that Modi has been telling lies and claiming that the BJP has not implemented OROP.

There is another dimension to the decision to hold back the NDTV ban. Every media body in the country has protested the decision, comparing it to the emergency in 1975. The Editor’s Guild, Press Club of India and Press Club of Bombay have protested the decision. The Broadcasters Association has condemned it. NDTV has moved the Supreme Court against the decision. The editors of every major newspaper in the country have strongly objected to it. Not surprisingly, the only organisations which have supported the decision are Times of India and the CNN, owned by pro-Modi businessmen Sameer Jain and Mukesh Ambani respectively. They are more interested in being in his good books than ensuring the freedom of the press.

Online portal Scroll, also owned by Mukesh Ambani, has defended the government decision. An article insists that freedom of the press is a myth. It quotes an American journalist who claims that the freedom of the media is restricted to the owner of the publication, that most media persons would lose their jobs if they wrote against the interest of their owners. It has even implied that editors are dogs employed by owners to bark on their behalf.

THIS is unfortunately true to a large extent in India and Goa. Journalists have to dance to the tune of the owner. This is why Rajdeep Sardessai and Siddharth Varadhrajan were thrown out, and why even Arnab Goswami despite making money for the Times Of India was asked to quit. And I was forced to leave Herald which I built into the most influential paper with my sweat, blood, body and tears. In Goa, most newspapers are owned by mine owners who have no respect for idependent media. The control by big businesses or media is all the more reason why people in Goa should support independent media like the Goan Observer.

And a last stray thought for yet another Saturday. Donald Trump’s victory would suggest that the era of the liberal middle class is over, whether it is the US or India. Just as it was the underprivileged non-English speaking voters from the feudal hinterland who voted Modi to power in India, it was the relatively less educated white Americans who voted Trump to power.

The white blue collared workers without degrees had a sense of grievance as they lost their jobs to better educated migrants. There was resentment over better educated women getting jobs while they could not compete. There has also been a backlash against migrants from Mexico and other poorer countries who deprived white Americans of jobs because they were willing to accept lower salaries.

Trump was successful in tapping the not-so-hidden resentment of these groups in American society against the liberal political elite. He appealed to the worst instincts of the Americans and, to the horror of the civilised world, won the election. Not surprisingly, at the time of writing, not a single world leader, including Russian president Vladimir Putin whom Trump admires so much had called to wish him on his election as the new president of the US. Should we blame FBI director James Comey for Hillary Clinton’s defeat?