DAKSHINAYAN: Writers, social activists and intellectuals from all over the country came together last week to launch a movement against intolerance and jointly promote an inclusive society. 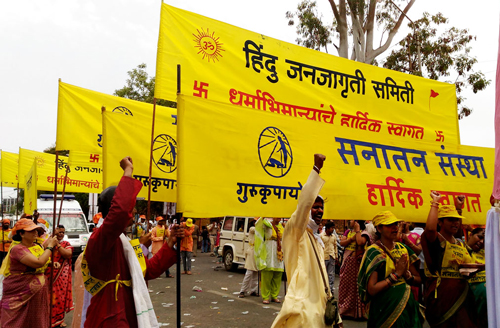 AND a few stray thoughts on the Ministry of Information and Broadcasting finding it mushkil to get a chief guest for the IFFI inauguration. None of the mega stars approached by the Directorate of Film Festivals were willing to accept the honour. Bollywood is very upset with the Bharatiya Janata Party (BJP) government for not protecting Karan Johar over the release of Yeh Dil Hai Mushkil. The Maharashtra chief minister forced Karan Johar to apologise and pay `5 crores to the army welfare fund, conditions set by Maharashtra Navnirman Sena Raj Thakarey for the release.

Initially the I&B Ministry had announced that Ajay Devgan would be the chief guest, but he backed out because he also has a film due for release starring a Pakistani actor. He is worried that he too may be forced by the BJP to pay `5 crores. With even Devgan – who is sympathetic to the BJP – rejecting the invitation, Sholay producer Ramesh Sippy was approached as a last resort.

SIPPY was to come to Goa for the Federation of Indian Chambers of Commerce and Industry (FICCI) annual film market. But he arrived late and Union Minister for Information Venkaiah Naidu began the inauguration without him. There were no stars in the IFFI sky at the event except MC Suhasini Manirathnam.

The highlight of the inauguration was the lifetime achievement award to veteran playback singer Balsubramaniyam who sang the theme song of Ek Dujai Ke Liye featuring Kamal Hassan and Rati Agnihotri shot at the Dona Paula jetty where the duo committed suicide in the film. The jetty has historically been known for the legend of Portuguese noblewoman Dona Paula’s suicide, and is now known as Ek Duje Ke Liye. Both stories tell of the suicide of the lovers. Dona Paula jumped to her death from the hillock because she was not allow to marry her Portuguese boyfriend just as Kamal Hassan was not allowed to marry Rati in the film. The jetty is now in ruins because of the concretisation which has yet to be completed even three years after it began.

The focus of IFFI’s inaugural ceremony was a celebration of women achievers. The dance drama was strangely enough choreographed by a man – Ganesh Achariya, perhaps because most women dancers and choreographers like Malika Sarabai or even BJP MP Hema Malini are not happy with prime minister Narendra Modi.

MOREOVER, the drama did not focus on the trauma of women who face the risk of raped and molestation. There was no reference to the Nirbhaya case or triple talaq. It celebrated the achievement of American astronaut of Indian origin Kalpana Chawla but ignored world tennis doubles No 1 Sania Mirza and even Olympic medallist P V Sindhu. To make up, I&B Minister Naidu announced that P V Sindhu had just won the finals of the Chinese masters tournament in Beijing.

IFFI’s media offering was badly organised this time. Many journalists including me who have been covering IFFI for years got their cards approved on Sunday afternoon, but they were only printed and handed over at 6pm, long after the inaugural session had begun. There were very few media invitations for the opening ceremony, with all the invites going to BJP bhakths. I understand that VIP invitations were freely available in chief minister Laxmikant Parsekar’s Mandrem constituency.

UNLIKE in the past, most cabinet members and even opposition MLAs boycotted the opening ceremony. Even Raksha Mantri Manohar Parrikar left after a brief visit. It was a drab affair and lacked the glamour of earlier opening ceremonies. At the second IFFI in Goa, mega stars like Salman Khan had performed.

And a few stray thoughts on the Dakshinayan seminar at Ravindra Bhavan which brought together social activists, writers and intellectuals from all over India. It is an initiative taken by internationally reputed linguist Dr Ganesh Devy, touted to be the next Jayprakash Naraian who had led the revolt against Indira Gandhi.

Dr Devy believes the present situation is worse than that during Indira Gandhi’s emergency with the government suppressing the freedom of thought and expression. The BJP government has also been targeting dalits and undermining academic freedom in universities like Jawaharlal Nehru University, the Indian Institutes of Management and the Indian Institutes of Technology. The Human Resource Development Ministry has yet to appoint directors for 13 of India’s 20 management institutes.

The seminar is the first step in launching a movement against Modi’s dictatorship. The latest attack on the common man is demonetisation which has caused incredible problems to the poorest sections of society like landless farmers, migrant labours and daily wage employees in tea gardens and factories. There have been more deaths due to the badly planned demonetisation then in terrorist attacks by Pakistan.

Part of the problem with the Dakshinayan and similar seminars is that they end up as merely talking shops where people are engaged with those who are already converts. Intellectuals in India, particularly those who speak English, live in ivory towers and do not understand the ground reality.

In the 70s, they got involved in labour movements and struggles of the dalits. Indeed, the entire dalit moment in Maharashtra was because of the support of the intellectuals. There was also a conscious movement to involve young people, particularly students who are liable to fall victim to Sangh Parivar propaganda.

THINKERS have to become activists and it is vital that such conferences be live streamed on Facebook and Youtube. We have to accept the reality that most young people get all their information from their smart phones. Social media has been captured by the Sangh Parivar who launch vicious attacks on anyone who disagrees with Modi or the BJP. Well-known anchor and founder editor of CNN 18 Rajdeep Sardessai was literally in tears when he disclosed how he was hounded by the Sangh Parivar and the Modi brigade.

For the first time, I stayed at Margao’s Nanutel hotel though I have visited its restaurant many times before. I was pleasantly surprised with the superb quality of service and the hotel, which is a favourite of the business community. It is comparable to some of the best five-star hotel in Goa and represents real value for money. I have never come across a starred hotel in Goa which offered tea at 6am and for less than `50 a pot serving two.

I WAS very impressed with the quality of service and reasonable rates in the centrally located business hotel in Margao, which does not have any five-star brand despite being the commercial capital. Congratulations to Sudesh Naik and his Nanutel team! I am happy to recommend the hotel to anyone who wishes to stay in Margao or South Goa.

And a few stray thoughts on last week’s Income Tax raids following reports of attempts of large scale conversion of black money into jewellery. The first wicket to fall was of a doctor who runs a nursing home in Margao. Dr Lawande was raided on reports that he had used his stack of `1000 and `500 notes to buy jewellery worth crores. The other party raided in Margao was mine owner Agarwal, who incidentally owns the land on which Dona Paula’s Aivão village stands.

In Panjim, the shocking news was raids on the Fomento group. Cidade de Goa hotel, the Goan newspaper and TV channel Prudent Media, all owned by the group, were raided. Chairman Avdhut Timblo and other directors were not allowed out of their homes and offices, forcing Timblo to skip the session on mining at the Dakshinayan seminar. Rumours spread that Fomento was being targeted on suspicion that it was funding the Goa Forward party and the anti-Modi Dakshinayan convention. Goa Forward president Prabhakar Timble is a Timblo employee and looks after their media interests.

The group has also been accused of massive violations of the Coastal Regulatory Zone rules. The Supreme Court had ordered the demolition of large parts of Cidade de Goa. The Timblos got it regularised with retrospective effect due to their closeness to former chief minister Digambar Kamat. In fact, Avdhut Timblo boasted that he had made Kamat the chief minister.

The Fomento group, Goa’s second largest mining company, has also been accused of huge amounts of illegal mining by the Shah Commission. The recent raids continued for three days and may have been aimed at crippling their ability to fund candidates from the mining constituency and Goa Forward in the 2017 election. For a change, even the Times of India and other daily newspapers reported the raids on the front page. Owners of newspapers usually try to protect each other.

AN unfortunate aspect of the media coverage was a false report by the Herald that huge amounts of money were found from property owned by reputed gynaecologist and fertility specialist Dr Kedar Padte. Dr Padte is a pioneer in the entire range of treatment for infertility. I do not know whether he also offers surrogacy.

But he is a highly regarded doctor and a model citizen who has been honoured by the central government for being a regular income tax payer. The Herald wrongly reported that his hospital was raided, and money and jewellery found in hidden in hollow walls. He denied the raids and the Income Tax Authority confirmed that he was not the Kedar who was raided. Now speculation is on over who this Kedar is and who planted the story that the victim was Dr Kedar Padte.

And a last stray thought on the government giving an extension to the Bhaskar Naik Committee on the medium of instruction for schools. In the wake of demands by the Bharatiya Bhasha Suraksha Manch (BBSM) that grants extended to English medium primary schools run by the church be suspended, the committee was formed to advise the government. The deadline for submission of the report was November 20.

Obviously the government does not want to take the risk of antagonising either the church or the BBSM. If the committee favours grants to all English medium primary schools apart from those run by the church, it would strengthen the RSS and the BBSM who are contesting elections against the BJP. If the panel supports the BBSM stand that grants should be limited only to schools teaching in the local language, Catholic voters and the church would be upset.

The Parsekar government policy seems to be ‘when in doubt, postpone’. The deadline for submitting the report is now February 17, 2017. This will enable the BJP government to avoid the issue as elections are expected to be declared by the first week of December.

The hot potato will now be the headache of whichever party or group of parties forms the government in 2017.