JUSTICE FOR KILLING DABHOLKAR, PANSARE AND KALBURGI! It was a silent march by participants at the Abhivyakti Dakshinayan Rashtriya Parishad’s ‘Sankalp Yatra’ from Ravindra Bhavan to Lohia Maidan in Margao on November 18, 2016. The march was part of a three-day meet of discussions, talks, cultural programmes attended by over 900 delegates committed to defending freedom of speech. (Pic by Tara Narayan) 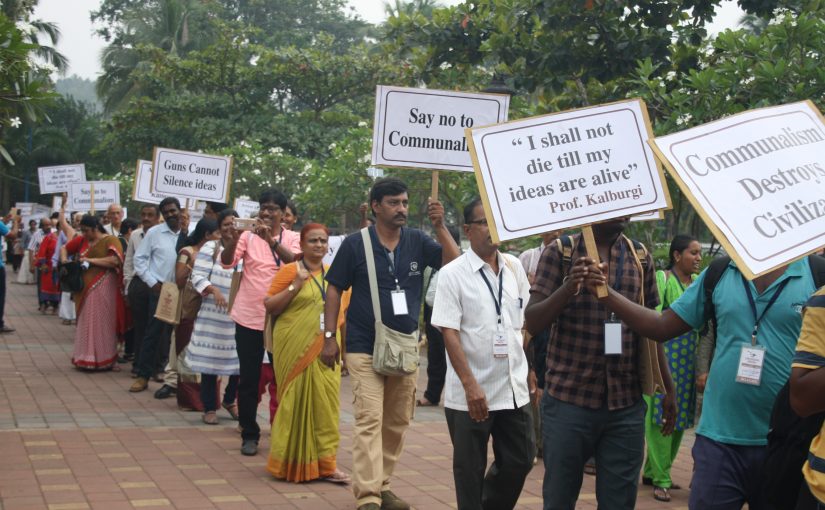 JUSTICE FOR KILLING DABHOLKAR, PANSARE AND KALBURGI! It was a silent march by participants at the Abhivyakti Dakshinayan Rashtriya Parishad’s ‘Sankalp Yatra’ from Ravindra Bhavan to Lohia Maidan in Margao on November 18, 2016. The march was part of a three-day meet of discussions, talks, cultural programmes attended by over 900 delegates committed to defending freedom of speech. (Pic by Tara Narayan)

ACCHE DIN FOR WHOM?

I STRONGLY believe that prime minister Narendra Modi made his recent “historic” announcement of demonetisation so much to fight a war against black money/corruption but only to score a few political points, and distract the people from all his government’s failures.

The end result of this demonetisation will be absolutely zero because people in India are deeply rooted in corruption due to a variety of factors. Corruption runs in the genes of all Indians. Most just don’t get tired running after money as they are forever hungry for more!

The main reason why most Indians are historically forced into corruption is because they have to fulfil demands and personal needs of their families to impress society. For example, every family celebrates numerous festivals with a big bang, compulsorily buying expensive things to show off status and wealth – the best and most expensive homes, jewellery, attire, cars, mobiles, etc. To indulge in all this, from where will poor people bring money and why will they ever say no to corruption, when they are forced to struggle to make ends meet by all governments through harsh taxes?

It is because of the lavish lifestyles we seek that we have become used to demanding bribes and forever seeking to make extra money through whatever corrupt means we can – not just in government offices but from top to bottom in our society and across the country.

Secondly, if Indians are seen hiding their money and refusing to part with half by way of taxes, it’s because they have always seen elected leaders looting this country systematically, pocketing and wasting public funds for years on end right. Who trusts elected Indian leaders and politicians today?

Our so-called leaders should first improve the conditions of the poor, eradicate hunger completely – and then alone dream of winning a war against black money and corruption. An exercise like demonetisation is not going to change the morals of our people! But corruption will cease automatically the day our poor start enjoying their acche din along with the richer classes and our so-called government servants (who are almost royalty now courtesy the acche din they enjoy by exploiting the poor). So much for Jai Hind!

IF you are growing anxious with the currently unfolding state of Goa and our country, you may want to align yourself with the Goenchi Mati movement detailed by the Goa Foundation. Help contribute by constructive participation and a sustainable future in Goa worth fighting for. Innovation and courage can take us and our children to a better, safer, greener Goa!

What are the inheritance rights of our children in Goa? The Goenchi Mati movements details this in its manifesto for the upcoming Assembly elections. I suggest all political parties who truly love Goa, and in the larger interests of protecting and conserving Goa for a future generation, subscribe to some simple Constitutional principles in the management of our natural resources, especially mineral wealth.

The Goenchi Mati movement urges all political parties to include these points in their manifesto: