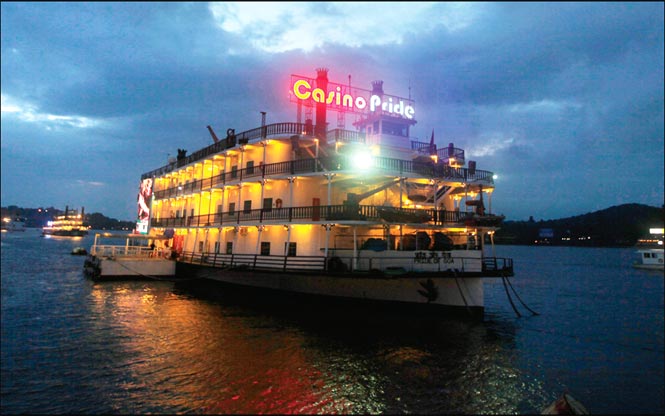 POLLUTED: Even the waterways have been polluted by not only permitting transport of ore in barges but by allowing casinos to park in the Mandovi

Successive governments have used and abused Goa. It has been repeatedly raped by a plunder of natural resources through mining, the loot of its agricultural land and the molestation of its rivers by casinos

Aheavy spell of showers was cleaving through the calm September evening as I entered the second-floor apartment in a quiet beach-side suburb of Chennai where Hartman de Souza had asked me to meet him.

His book, Eat Dust: Greed and Mining in Goa, which I had picked up entirely by chance from a neglected corner of our newsroom reserved for depressing tomes, had left me shocked, angry, and more than a little curious.

I had been to Goa a few times, and like almost everybody else, I had come away with the typical clichéd image of a sleepy tourist paradise where people had quirky accents and the alcohol was priced just right.

De Souza’s book talks of a different side of Goa: of vast open-cast mines belching iron ore and machines eating away at mountains, of rampant environmental destruction and the deafening indifference it has provoked from all quarters.

The dusty red Goa of Eat Dust is a sobering contrast to the blue waters and white sands of its famed beaches. De Souza is now working on a second book, about the Goan coast this time, but most of his time is spent touring the country with the Space Theatre Ensemble, a travelling theatre repertory that I suspect acts as a vent to the incredible frustration that must accompany documenting the pillage of one’s homeland.

Having completed its engagements in Chennai, the group was preparing to embark on the next leg of its constant journey. The atmosphere was light-hearted and convivial and the rum was flowing. With only a little bit of effort, I managed to sequester De Souza and convince him to let me pull my recorder out.

“The next book is like a sequel to Eat Dust, and will provide a narrative of Goa’s coastline, delving into both recorded and oral histories to see, first hand, what transpired by way of development from the 1950s till date,” he explained. “All along the coast, the 10 kilometres from shore to land have been plundered by greed, which has actively been aided and abetted by successive state governments and Goan apathy.”

In Eat Dust, De Souza talks of the three wolves that are attacking Goa, mining being the oldest and most vicious. The coast owes its troubles to the other two. “Now that mining is at a low, thanks to the drop in ore prices, real estate and tourism are the new frontiers,” he said, explaining that their rise paralleled the growth of illegal mining between 2006 and 2012 — a shady symbiosis of wanton profiteering.

In our earlier correspondence, he had told me that the book was tentatively titled Goa’s Dirtied Waters — A Thirst for More. “That says it all I think. Goans have bitten into the fruit of wanting more. The heart of the issue is water. We are consistently giving land to industry and allowing them to pollute our rivers. Everybody knows this, but nobody really gives a damn.”

In Eat Dust, Hartman’s sister Cheryl, and her struggle to hold out against the mining companies eating away at the land all around her home, is a central part of the narrative. It was clear from our conversation that the issues of the coast too were affecting De Souza at a deeply personal level, threatening to eat away at a way of life he finds central to his identity.

Clearly unhindered by the diminishing rum in his glass, he delved into memory, recalling how as a young student, he would bathe in the pure water of a well in Anjuna that was barely 20 metres from the sea.

“Now, all those wells are filled with sewage. From Baga, all the way down to Candolim, where Vijay Mallya, and probably half of Delhi and Mumbai’s elite have their houses, none of the wells are used. They’re closed with nets, or filled up with cement to create parking space for one more car.”

With the traditional sources of water lost or over-stretched, the hotels and shacks that line the coast now turn to the interiors to meet their need for water. And this sets in motion yet another cycle of over-extraction and depletion as inland villages suck their wells dry to fill tankers bound for the coast.

Meanwhile, the fishermen who have called the coast home for generations are no longer fishermen. “There is a certain rhythm to the traditional way of fishing. They wouldn’t fish until the end of September because till then, the fish are coming upriver to spawn. But now, with the trawlers, you get mackerel with eggs still inside them. So it’s no surprise that the catch is dropping.”

Driven by falling fish stock, many of the trawlers based out of Goa have hit upon a bizarre arrangement that sees them sail into neighbouring states’ waters, where they buy their catch from other trawlers and return to sell it in Goa.

With their ancestral hunting grounds colonised by commercial trawlers, the Goan fishermen have morphed into landlords and restaurateurs. “Suddenly they realise they are sitting on real estate that is valuable. So they develop it,” he explained in his Goan drawl, pausing occasionally to puff at his cigarette.

“They make money for about three or four years. Big money. A bottle of water can sell for up to `60. They pay what amounts to slave labour rates to guys who come from Nepal who cook and clean in their restaurants. And once they make enough cash, they subcontract the place to somebody else. So maybe the guy who was running your kitchen, the Nepali, you give the restaurant over to him and you sit in your house upstairs. Goans are selling Goa. And, of course, it’s not just the locals, everybody who’s anybody wants a piece of the action… Goan real estate guys, national companies, multinational hotel chains. And everybody who has come to Goa has used it as a whore.”

De Souza’s diatribe, fraught with emotion and littered with expletives, concluded with a coughing fit. The rains had let up by now, and a pleasant silence punctuated by dripping water had descended upon us.

Sensing that the interview and the rum were nearing their end, I pressed De Souza for a silver lining. Surely there must be some hope, some stirring call to action that promised a better future if this or that could be changed in time? I was wrong.

“There is no future for the Goan coast,” said De Souza, his voice clear and calm now. “I used to go to Anjuna quite a lot because my sister’s house is there. There used to be a good 30-40 metres of beach. There’s barely any of it left now. It’s totally eroded. And this is happening all along the coast from north to south because of the rampant encroachments and sand mining. You can’t mess with the sea like that. It’s not that simple. So if you go down to Anjuna today, you’ll see that half the back wall of my sister’s house has disappeared. Who gives a shit? Nobody. Because everybody goes there, sets up a restaurant or a hotel, makes their money and moves somewhere else. That’s the nice thing about money, no? As a multinational I can come to Goa today, it’s a great place, but tomorrow, if there’s a problem, I can just up and move to the Maldives. So, Goa is gone. I don’t think the average Goan realises that this is globalisaton. No place is important any more. It’s all about how much money you can make in a particular place. The Goans will just go to Portugal. There is nothing left in this place.”