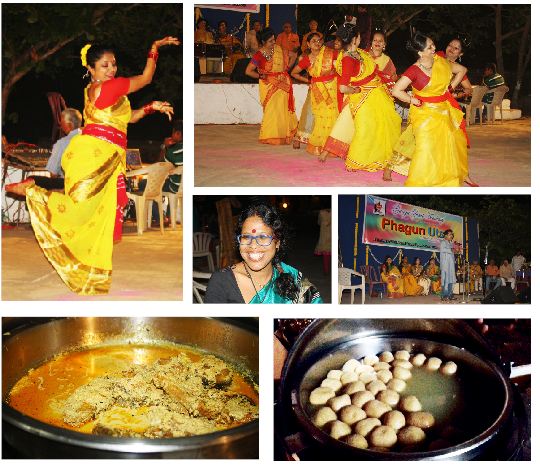 The Ganga Zuari Academy organised a Phalgun Utsav with a difference at the International Centre Goa on Sunday, March 12, 2017

SPRINGTIME is here, rejoice! Say it’s the call of the 5th (panchami) day of the Hindu lunar calendar month of Phalgun when the full moon shines bright and nearly all of us are tempted to do something to celebrate the colours of life in spring. Say it is to do with welcoming springtime (Vasanta, feminine persona) after the winter months. Colours are divine in Hindu mythology and why shouldn’t they be? All of us have a favourite colour!

Holi probably originates with the oldest story of them all, to do with demon Dhounda who used to frighten children in a village and folk started lighting bonfires to chase her away. This is from the Bhavishyapuran. Elsewhere in the country, one hears of demons Putna being burnt in a Holi bonfire; and there’s also the much recounted story of baby Prahlad who was praising god Vishnu too much and an irritated father – demon King Hirankashyap – decided to do away with him, ordered his sister, the fire-proof Holika, to sit with Prahlad on her lap in a bonfire. Except that it was she who got burnt! Vishnu bhagwan came to the rescue of Prahlad.

Some mythological legend also has it that three days before the festival of Holi, the bal Krishna was put in a cradle and rocked, and most of us know Krishna kanaiya grew up to be a keen player of Holi, the festival of smearing colours along with splashing fragrant water tinted red with the flowers of the first flowers of the palash or dhak or flame of the forest tree, on one another.

Apart from that, Holi’s bonfire also became a sacred ritual of festivity. The country over, folk light a bonfire or conduct a havan (a sacred fire) to mark the passage of Holi, Hori, Dolyatra, Shigmo, Hutashani mahotsav, or Holikadahan, as it is variously called depending on where it is celebrated.

In Goa, Shigmo sees parades around town depicting scenes from the Ramayan or Mahabharat. Along with this, there is the revelry of dousing coloured powders and coloured water. It’s become a most boisterous festival.

THIS year in Panjim the interestingly named Ganga Zuari Academy largely made up of the Bengali community decided to celebrate Holi, or rather Dolyatra, on a larger scale, so non-Bengalis too could join in. They had a Phalgun Utsav on the lawns of the International Centre Goa on Sunday, March 12, a gracious evening of cultural programmes invoking the much-loved Rabindranath Tagore, with folk singing and dancing from Bihar, Orissa, Assam, Maharashtra, West Bengal.

It was Phalgun Utsav with a difference under the Phagun poornima star-studded sky. One got an insight into Shanti Niketan singing and dancing courtesy talented artistes, many with links to Shanti Niketan or the Viswa Bharathi University as it is now called. Here, emphasis is placed on music, dance and other cultural activities. There was Rabindrasangeet to delight the mind and popular Ajanta & Group performed the elegant rangoli Bihu dancing from Assam.

Arundhati and Kunal da sang popular Tagore songs including one titled in English translation “I’m a traveler who’s lost my way…” (from all accounts a song first written in 1960). There was a Kesaria dance troupe and the cynosure of much attention was robust baul singing by Sonali Chakraborty. Apparently  Tagore’s poetry was influenced by baul. Children presented the Gujarati garba-dandiya choreographed by NIO’s Dr Kocherla.

The evening ended with friends smearing each other with gulal amid happy chatter and of course, a delicious dinner featuring Bengali dishes beguni, luchi-roti, sada bhat, cholar dal, aloo phulkopir, shorshe maach, kosha murgir mangsho, all to be relished with lashings of delectable aamer chutney! The dinner was prepared by chefs of community food restaurant Bangaliana at Porvorim.

Interestingly, some non-Bengali guests decided to become life members of the Ganga Zuari Academy to be kept informed about future activities!