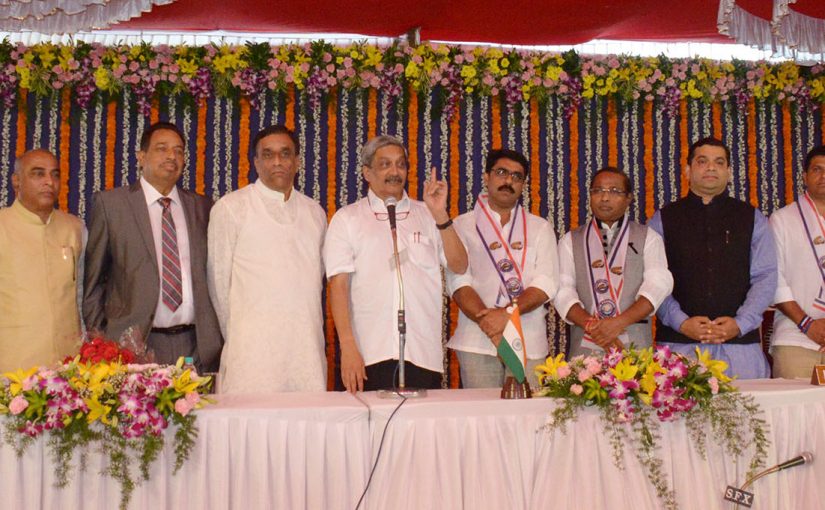 IT’S been mixed fare Holi celebrations for me, my dears! I went to pick up Bicholim’s most famous khaje at Sawant Brothers to welcome Congress’ ‘Janata Raja’ Digambar Kamat as the old-new chief minister, and instead got a lesson in quick-fix politics without manners or a conscience. Goan politics has become like any nallah you can think of in Goa. The cesspool continues to turn at the lowest common denominator, and when that happens, one doesn’t know whether to shrug and laugh it off or weep with despair.

There I was all set to enjoy a colourful Holi when the news came in that all is not well in our political environment. I’m not a political animal, but am forced to be one because all around me I see the politics of a dying democracy and emerging egoistic vanity. Will someone define morals and ethics for me in the new contexts on a roll by hook or by crook?

Without any time-tested morals of behaviour can there be any stability or anchoring in life? Who can we trust not to backstab us the moment we turn? Here I was one moment thinking that since the Congress had won 17 out of 40 seats, perhaps it would be useful and entertaining to see an arrogant BJP sitting in the Opposition to take stock of the politics of convenience and U-turns, and how in the long-term it damages the quality of democracy. But then the BJP doesn’t subscribe to democracy, does it?

In the blink of an eye before one could say Manohar Parrikar or Digambar Kamat, the template had changed and India’s defence minister is now once more the chief minister of Goa! Oh, déjà vu! In media circles, some chuckled, “The Congress is full of such thickheads that they have nobody who can run from Mandovi Hotel to Cidade de Goa in an hour, forget walking!” The Congress is like a house of cards and who can put it together again?

It seems in politics, the numbers game is all about how quick one’s reflexes are in seizing an opportunity – politics being more an art of opportunism than governance to fill up pockets or stroke one’s ego. Whatever the BJP is – King Ram of Ayodhya or King Ravan of Sri Lanka – it can sure move with indecent haste to force governor Mridula Sinha into declaring it has the magic number of 21. The Congress with 17 victories can’t move fast enough, so steeped is it with the granddaddies of yesteryear politics playing a game of one-upmanship!

CAN’T help thinking, my dears, that we have become a choron ki bharat and everybody thinks it’s a privilege to be a thief, a blackmailer, a cheat, an extortionist, a ruffian, villains all wearing various masks of dubious heroism. One moment a favourite politician, Vijai Sardesai, is spewing fire and brimstone at the BJP’s U-turns, but when the chips are down he is happy to do a U-turn himself. Who care what happens to all those who voted for him and his pals because his Goa Forward party was – anti-BJP? In a democracy, one is allowed to be anti-anything or pro-anything providing there is a level playing field. It is this level playing field which is disappearing from modern politics in Narendra Modi’s India.

Are we perennially doomed to sit on a fence to be anti-BJP one moment, pro-BJP the next depending on where the grass looks greener for the flimsy shrubs of ambition to become fruit-bearing trees in a hurry? The BJP seems to have become the godfather of all politicians old and new! Well, perhaps not all. It leaves me thinking that there are no rules anymore, no morals, no ethics, in a rapidly changing political scenario where everyone seeks power without a conscience.

If you’re a thief but you win votes, you’re welcome; but if you’re an honest man and you lose, you are not welcome. Someone will tell me to stop being a nerd with such Pollyana drivel. So in life, are we are all more or less thieves, blackmailers, cheats, extortionists? How easy it is to get away with it with a little bit of luck! Look at all the big folk who have borrowed our money from banks and become millionaires, billionaires, trillionaires, and this government talks of being pro-poor, pro-aam aadmi, while continuing to stay warm in khaas aadmi pockets! Who is going to fill up the empty coffers again? Who believes in banks anymore, my dears?

Do you want to join the carnival of thieves, cheats, blackmailers, etc? But I’m just making a point here. It seems they have a great future ahead in a country where democracy is becoming farcical. One may promise one thing one day and another the next day, all the way down the hierarchy of political power which corrupts absolutely.

I will leave you with one thought: When nobody wants to be in the Opposition and nobody believes in fair play anymore, is it the beginning of goonda raj masked and un-masked? If everybody wants to be in the ruling party in the name of good governance, is good governance only the prerogative of a government in power? All that we have seen so far is the governance of the big grab, the filling up of personal pockets. And when the pockets become too heavy, a few crumbs fall for the second and third generation of thieves! In time, perhaps holes will develop in the story of our democracy and many of our emperors will be naked if they aren’t already. To think a lot of our young people envy or want to walk in their footsteps! What a fall, my dears.

So have we become a nation of pickpockets? Once upon a time as fresh scribes we were constantly forced to adhere to what, where, who, when, how and why of a story – the why being the most interesting for me. In the context of where our politics of convenience is heading today, perhaps we need to look inwards to ask why? Why is the idea of U-turning constantly to be a turncoat so desirable? And where will it take us in the long run? Look at the rest of the world. There are plenty of examples in a world spoiling for a fight, a nuclear fight in which the very primary resources which keep us a alive – air, earth and water – will turn toxic big time.

I leave you on that note, my dears. I love the pure colours of the Holi festival enshrined in the blossoming of summer trees, but this Holi, all I see is  fungus-filled rancid pickle reds and yellows, militant chauvinistic khakis and deathly dirty whites and blacks. There are no clean, honest, vital life-giving colours, only plastic ones and a most depressing, unholy Holi.It brings to my mind constantly the 1957 Guru Dutt classic from the film Pyaasa, “Yeh mehalon, yeh takhton, yeh taajon ki duniya, yeh insaan ke dushman, samajon ki duniya.” The problem with Pyaasa songs is that if I listen to one, I start listening to all one by one for old time’s sake. Some 45 years after I first heard them, I’m still mesmerised! Why hasn’t anyone made a film on the life of Guru Dutt?

ITEM number two: You know what happens when you lose faith in a government and a country? I was quite upset when I stepped into my favourite grocery store and asked my friend, “How do you feel these days, Lynette?” She replied, “For the first time in my life I don’t feel safe in my own country!” Her reply silenced me for a while but I reassured her, “If it’s any consolation I’m from the majority community and I don’t feel safe either!”

Later that evening I went to the Confederation of Indian Industry (CII) do where they were celebrating Goa Annual Day 2017 on March 10, and listened to fine folk talk about how they could open a business in Singapore in 24 hours and get an electricity connection in four days without meeting a single politician/bureaucrat with everything laid on to facilitate ease of business opportunities. And here’s our poor little rich Goa being taken for a ride to doomsday by a bunch of politicians!

Despite the hundreds of reforms, nobody can start a business without greasing enough pockets in Goa or in India. What is it? Is it the failure of the kind of politics we practise, or the failure of the kind of business we practise? I’m sure both have a bearing on one another. If the message that the world’s most populous democracy is going for a toss spreads, it follows that even our own astute business folk will start putting their money in other countries like Singapore and Zambia.

Someone said we need a cultural shift in mindset. It reminded me of what Dr Oscar Rebello said at the Dakshinayan meet at the Municipal garden a week ago at the freedom of expression protest. He said it was not the older generation which will sweep in this desirable change in mindset, but the younger generation. A lot of rubbish needs to be swept away, but it will take time! How much time?

I’m beginning to fear for my India, my Bharatdesh, my liberal thoughts of Hinduism as enshrined in a word or two to mahadeo occasionally. On that note, it’s once again avjo, poiteverem, selamat datang, au revoir, arrivederci and vachun yeta here for now.