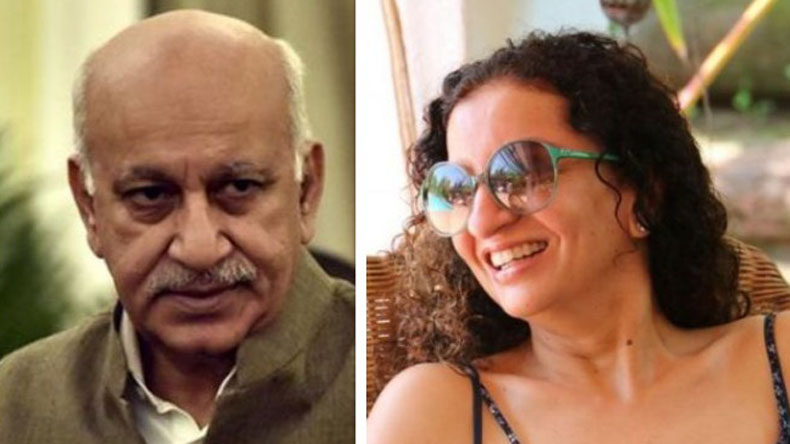 NOT REPENTANT: MJ Akbar (l) has chosen to dismiss all the allegations by 20 different women as “false and fabricated, spiced up by innuendo and malice”. Priya Ramani (r), supported by her husband, Samar Harlankar and other alleged victims of Akbar, faces an onslaught by a huge team of lawyers and says “the truth and the absolute truth is my only defence”

Union Minister MJ Akbar’s defamation suit targets only Priya Ramani, the first of multiple women who accused him of sex harassment. She faces an uphill battle with all of Akbar’s power and money against her. However 20 women journalists have pledged to testify in court against him

My wife Priya [Ramani] is amongst the 14 women journalists who have named union minister MJ Akbar for a range of inappropriate workplace behaviour.
I have known of her close shave with predation ever since I have known her, about 20 years. Even though, Akbar did not, in her words — which he now gratefully quotes — “do” anything, there were others who apparently suffered worse and whose experiences are now public. No one ever spoke up against powerful men because the misuse of power and authority was considered normal. There were no redressal mechanisms within media companies, no one took such complaints seriously, and the only ones who stood to lose from going up against powerful men were the women.
When women younger than her started to share traumas and experiences far worse than hers, and references grew in the media world to “the elephant in the room”, a man more powerful than others like him, my wife decided she could no longer stay quiet. She has always had a strong sense of right and wrong, black and white, and she has never lacked courage. It is one reason I married her.
Yet, it took a special kind of courage to name a powerful minister and former editor. We live a quiet, unobtrusive life far from India’s centre of power, and while she did not regard her action as taking on a minister, she was somewhat aware that anyone who set the ball rolling might become a target. That is what happened. Our quiet life has been torn asunder. Her phone rings incessantly. So does mine. Most are reporters seeking comment or television appearances — which she has always refused — some are other women who were the subject of Akbar’s attention. Those who cannot reach her try to call me. I used to answer unknown numbers; from today I will not.
Akbar has filed a case of criminal defamation against my wife. She has, whether she likes it or not, become a lightning rod. His intention is clear: To intimidate her, and through her to intimidate the others who have spoken up and silence others who have not. Criminal defamation, a strong protection afforded by the law, can sometimes be used as a tool of intimidation. A criminal defamation notice as a response to multiple allegations of sexual harassment can also be seen as a strong signal from Delhi’s political establishment that women should be made aware of their limits, and what better way to do this than target one woman. This is not Akbar vs Ramani, this is the Union of India vs Ramani. He has access to a battery of powerful lawyers: There are 97 listed in the legal notice. She has, thus far, one.

As the defiant, menacing reaction indicates, the culture of sexual harassment and male impunity is so ingrained, omniscient and normalised in our professional lives that India’s elected government feels it can either ignore or mock the accounts of a diverse lot of women and stand by a lie. And note that there have been no expressions of support from opposition parties because they are all complicit in maintaining the status quo. More than 70% of sexual harassment cases in India, by one estimate, are never reported.
India’s patriarchy understands what is at stake and will not give in without a bitter fight. If an Akbar is conceded, there are countless others whose careers will be in jeopardy. Sexual misconduct in India has, thus far, been regarded a part of life — to be endured, and in so doing, confirming the supremacy of the male because, of course, men must be men and a woman must know her place. So instilled is the sense of male superiority that millions of women are willing accomplices. From childhood, girls in India are discriminated against and told — by their mothers — that they are inferior to men.
India’s culture is so toxic that 52% of Indian women, polled in government-run national family health surveys — the latest released in January 2018 — said it is acceptable for a man to beat his wife (that’s higher than men, 42% of whom believed wife-beating was acceptable). Education only appears to mildly temper this belief. As more and more women flood workplaces, society is undergoing a massive reconstruction, but the problem is Indians in general, and the Indian male in particular, remain unreconstructed.
That is why, over the years, sexually harassed women have wrestled with the feeling that what was happening was not right. But, they believed, they would be laughed at if they complained; that no one would believe them; that they may lose their jobs; that nothing would happen anyway; and that their best bet was to tough it out and put up with it because that’s how just how it was.
The #metoo movement has demonstrated that sexual harassment or intimidation is not normal, and no woman should have to put up with it. There must be consequences, and what we are now seeing — in some cases — are the first results of this new realization. To head off those consequences, powerful men who represent powerful institutions will deploy their strongest weapon: Intimidation, of the kind my wife is now experiencing.

This kind of intimidation carries big benefits for small effort. We do not, for example, have institutional backing to fight the case Akbar has filed. We do not have friends in Delhi’s powerful circles of politicians, bureaucrats and lawyers. We know he has vast resources to deploy; it startled us to see how quickly he could get our home address, which is now available to anyone who seeks it.
But we do have one important weapon: The truth. We also have the conviction to stand up for what is right and just and not back down in the face of power. As more women fight for the right to a workplace free of sexual intimidation, more of them will have to speak up and stand up for their rights. This case is a detriment to that ability.
Men cannot truly know what it means to fight the battles that the women of India do. There are men who believe it is time to move beyond expressing solidarity and support, but they will still find it hard to move from being bystanders to participants. There are men that the women ranged against Akbar reached out to for support, men who witnessed his behaviour at close quarters, but not one of these men has spoken out. It is the same in other industries, such as Bollywood, where men remain within their closed, dark world, hoping normalcy will return soon.
But the normalcy of unreconstructed men will not return. The women of India will ensure it does not. It is the job of men to move from the sidelines and join the fight wholeheartedly. If they cannot, they should step aside and leave it to the women.
I was unsure how to react when my wife first named Akbar. I was admiring of her courage, of course, but I did realise that, sooner or later, I would have to become a participant, if the revolution had to be taken to its logical conclusion. But I feared the costs. I feared the end of our small, quiet life and uncontroversial existence. I feared — and still fear — the effect such a battle could have on our small family. I feared having to step out and step up. That fear must now end.