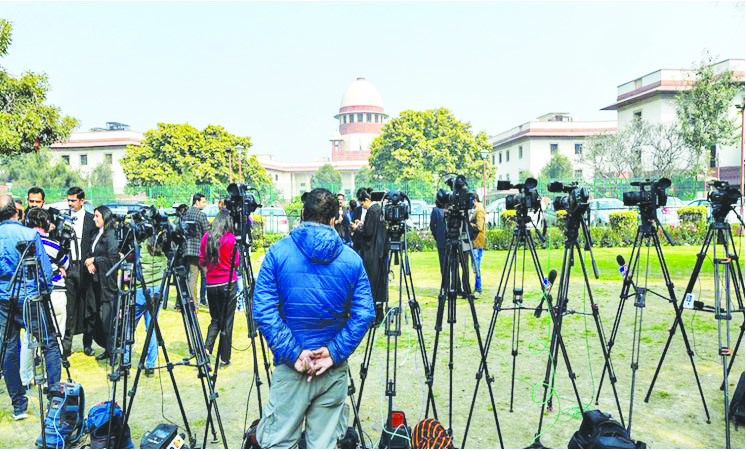 PROTEST: Media protesting outside the SC against its order that it is obliged to publish the official version which is often manipulated and false

By directing media to publish the official version of major events as perceived by the government, the Supreme Court has become a collaborator of the Executive Authorities…..

A Public Interest Litigation (PIL) filed for the redressal of grievances of migrant workers during the coronavirus pandemic, specifically sought directions for government authorities to provide shelter and basic amenities to the migrant workers. On March 31, 2020, the Supreme Court passed a vague and unrelated order in this PIL directing print, electronic and social media to refer to and publish the official version about developments pertaining to the pandemic.
In making this arbitrary and callous leap, the apex court has not only demonstrated little regard for freedom of press, but also enabled and sanctioned the government’s endeavour of stifling criticism, establishing a monopoly over information and effectively controlling public opinion.

Legality of the order

At the outset, it is necessary to understand the genesis of this order. In response to the PIL, the Union of India filed a thirty nine-page status report, highlighting in detail all the actions undertaken by the Union government to fight COVID-19. The status report dismissed the existence of any legitimate cause for the migration of workers and stated that, “there was no necessity of migration of workers”.
Thereafter, without providing any basis or evidence for the same, the status report attributed the migration to the panic created by “some fake news.” On this basis alone, the Supreme Court concluded that the migration was “triggered by panic created by fake news that the lock down would continue for more than three months.” The Supreme Court then directed the release of a daily bulletin by the government to clear the doubts of people and ordered the media to “refer to and publish the official version about the developments”. In the same breath, the court ironically observed that it did not “intend to interfere with the free discussion about the pandemic.”
This order of the apex court is vague and has no basis in law. According to settled jurisprudence, the fundamental right of freedom of speech and expression cannot be restricted by judicial order as any restriction on a fundamental right must have a statutory basis. The rationale behind this is to ensure that deliberation precedes any restriction on the freedom of speech and expression.
This has been squarely defeated by the Supreme Court by flippantly imposing a restriction on the basis of an unsubstantiated fact put forth by the government, without providing the affected parties like media houses with an opportunity to be heard. In a PIL where the respondent (the government) sought a restriction on reporting and the petitioner was only concerned with the plight of migrant workers, the possible chilling effect of the order on freedom of speech went unaddressed.

Implications and aftermath of the order

In passing this order the apex court has masked the failings of the government. The principal causes of the exodus were the lack of foresight and planning, and not fake news. This is evident from the fact that all remedial actions were undertaken after the announcement of the lockdown and in response to the migration. Such delayed actions inevitably could not stymie the growing migration. The apex court has enabled governmental inaction to take a backseat by attributing the migration to fake news.
Such a restriction served on a platter by the judiciary, serves the government well for three reasons. First, is the immediate effect of the order, wherein the restriction came to be imposed on the very day the status report was filed. Second, is the undisputed finality of the order, as a similar restriction if introduced through executive or legislative action, could have been subject to challenge before courts. Third, is the vague language of the order which left it open to the government to determine the breadth of the restriction. The more detailed and expansive the “official version about the developments”, the lesser the room for free reportage.
Authorised by the decision of the court, on April 1, 2020, the Press Information Bureau, Government of India (PIB) released a circular stating that a daily bulletin will be released by PIB, “at 8 pm everyday to inform regarding government’s decisions and developments and progress on COVID 19.” A reading of these bulletins shows that it is a cherry-picked summary of the government’s political, economic and fiscal decisions, aimed at conveying the government’s success in fighting the pandemic.
The PIB daily bulletins are not merely restricted to official statistics of the people affected by COVID-19. Instead, they expansively outline various measures taken by the Central government, its individual ministers, and select government undertakings/ institutes in combating COVID-19.
This includes the government’s factual claims that the Food Corporation of India is ensuring an uninterrupted supply of wheat and rice throughout the country during the lockdown period; there is no dearth of medical supplies across the country to fight COVID-19; money is being smoothly disbursed to the beneficiaries of Pradhan Mantri Garib Kalyan Yojana by the Ministry of Home Affairs; the tweets of the Prime Minister; the contributions made by select ministers and companies to the PM CARES FUND; the blacklisting of 960 foreigners for their involvement in Tablighi Jamaat activities and the significantly improved BARC ratings of Doordarshan due to the re-run of its old shows such as the Ramayana and Mahabharata in the time of the lockdown.
In the above context, the directions of the apex court to “refer to and publish the official version about the developments” is nothing short of a diktat that glorifies and sanctions the “official version” of the government’s policies, financial packages, schemes and even, TV programmes. How is the media to effectively act as the fourth pillar of our democracy that criticises and questions the actions of the government when it is bound to faithfully report only the official version of the government?
The extent and the breadth of the apex court’s directions are left for anybody’s guessing. It may be argued that a strict interpretation of the order signifies that only what is stated in the bulletins can be reported by the media and nothing else. It may be argued with equal force that any coverage of COVID-19 measures must, at least, refer to the “facts” stated in the bulletins and that the media is at liberty to deal with other issues not covered by the bulletins.
This lack of clarity that shrouds the line between what is permitted and what is not, creates a chilling effect on the freedom of speech and is a weapon open to abuse. However, it is clear that reporting alternate or contradictory facts (for example, that the FCI is not providing an uninterrupted supply of wheat and rice) would constitute “fake news” and violate the order. Regardless of the specific intent and the enforcement of such an order, it sounds a death knell to the freedom of speech and expression and the free media of the country.

Accurate and responsible reporting is crucial to tackling the pandemic. The problem of “fake news” could have been adequately addressed at an individual level under the Disaster Management Act which specifically penalises the creation of false alarm or warning, leading to a panic. The concern of “fake news” cannot be touted as a reason to pass a blanket restriction across all forms of media, and put forth claims of the government, with all their misgivings and exaggerations, as the exclusive truth of the day. At a time when the dissemination of information and research is paramount to tackling the crisis, the arms of the media must be strengthened and not cut off. Not only does such a measure silence any critic of the actions of the government, but it also limits the free flow of information which could assist in further improving existing policies.
In this context, the Editor’s Guild of India has issued a statement terming the advice of the apex court, “gratuitous and unnecessary” and expressed its anguish at the order by stating that, “no democracy anywhere in world is fighting the pandemic by gagging its media”.
Similarly, PEN Delhi and Committee to Protect Journalists noted with concern the growing intolerance of the government towards the media in India during the ongoing battle against COVID-19 and cited illustrative instances such as the prime minister requesting owners and editors of print to publish positive stories in this time of crisis, the police assaults on journalists covering the pandemic across Hyderabad, Mumbai and Delhi, the registration of FIRs against the founding editor of The Wire for “objectionable content” against the Uttar Pradesh chief minister and numerous other instances of assault and abuse of individual journalists for reports that are critical of the government.
The government’s attempt to establish a singular narrative of the battle against COVID-19 goes against the fundamental tenets of a democracy. This forms part of an insidious and self-aggrandising attempt of the government to establish an endearing face of the government in the minds of the Indian populace and the world at large. The government’s attempt to make all news its captive, under the pretext of preventing fake news, goes hand in hand with measures such as the creation of the PM-CARES fund for the mobilisation of COVID-19 donations (despite the existence of the PMNRF), which compels the common man to take note of the “care” of the prime minister.
The government will do well to not forget that a crisis cannot and should not be a gateway to accumulate power and elicit support. In these testing times, civil society must ask itself whether all it seeks is a false sense of comfort and an unflinching belief that the government is solving the crisis, and nothing else.