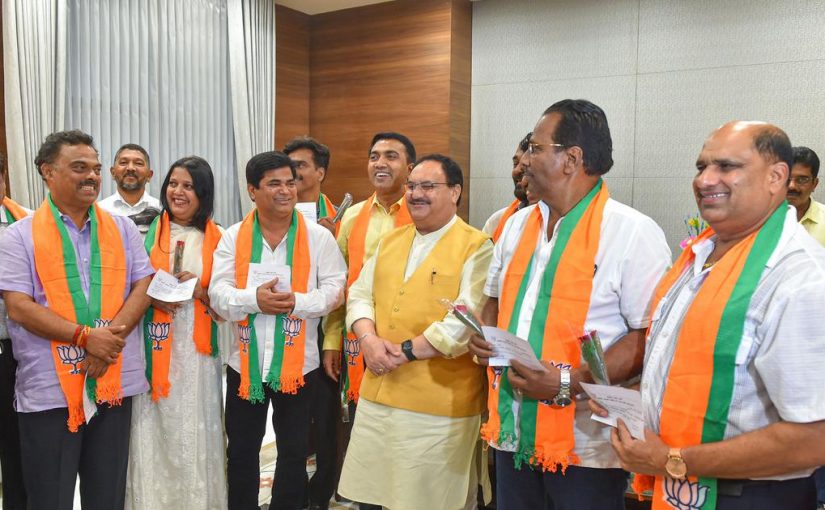 DEFECTION: Following the death of the late Manohar Parrikar 10 Congress MLAs led by Chandrakant Kavalekar and two MGP MLAs merged with the Bharatiya Janata Legislative Party to continue to stay in power

Speaker of the Legislative Assemble of Goa Rajesh Patnekar is accused of delaying the verdict on the defection of 10 Congress MLAs and two MGP MLAs….

THE disqualification petition of the MLAs adjudicated by the speaker being an authority within the house and his tenure being dependent on the will of the majority, likelihood of suspicion of bias cannot be ruled out and as such the speaker’s power to adjudicate disqualification petitions is the most discussed topic in public these days. The speaker while adjudicating disqualification petitions exercises quasi judicial powers as a tribunal and therefore a decision with respect to disqualification of a member has to be rendered in consonance with the scheme for adjudication of disputes.
In accordance with the Constitution of India, rule of law has in it firmly entrenched natural justice which includes rule against bias and as the speaker since is not only the sole but the final arbiter of a question of disqualification of a member, which is an adjudicatory disposition with no provision for any appeal or revision against the speakers decision to any independent outside authority but only amenable to judicial review, it is necessary that a tribunal presided by a retired Supreme Court judge or a retired chief justice of a High Court be substituted by amending the Constitution.
A judge is disqualified from determining any case in which he may be or may be suspected to be biased as justice should not only be done but should manifestly and undoubtedly be seen to be done and therefore considering this principle, it appears that since the office of speaker cannot be attributed to impartiality, the powers exercised by the speaker with respect to deciding a disqualification petition of a MLA is to a larger extent violative of the basic feature of the Constitution of India.

THE Supreme Court considering it, has now and again reiterated that speaker since he is acting as a tribunal, is bound to decide disqualification proceedings within a reasonable period, and in absence of exceptional circumstances, a period of three months from the date on which the petition is filed is the outer limit within which the disqualification petitions filed must be decided. If the Constitutional objective of disqualifying persons who have infracted the 10th schedule is to be adhered to or else the very purpose of seeking disqualification of a member will be defeated.
Disqualification proceedings as a rule are not in camera proceedings and are rightly open for the public, more so as the MLAs who attract disqualifications are answerable to their electorate.
A quia timet action is generally a bill of equity or an action preventive in nature intended to prevent an apprehended or anticipated mischief. Quia timet action in the sense of injunctions to prevent the speaker from making a decision on the ground of imminent apprehended danger which will be irreparable as he would incur the penalty of forfeiting his membership of the house for long period if the speaker proceeds to decide that the person be disqualified is not amenable to judicial review and is permissible in the context of anti defection laws only in cases of interlocutory disqualifications or suspensions which may have grave irreversible repercussions.
However, at times in cases of delay in disposal of disqualification proceedings, in the absence of quia timet injunction from the court, alleged suo moto quie timet action to not qua interlocutory disqualify or suspend the defected MLAs, is adopted for political reasons. The failure in deciding the disqualification petitions expeditiously is bringing to fore the evil of political defections, which is a matter of national concern and a menace likely to undermine the very foundations of our democracy. Therefore, the same has to be eliminated from the political system of India either by enacting strict anti-defection law or by having a re-think on the 10th Schedule of the Constitution of India. It is high time the Indian Parliament considers the views of the Supreme Court of India and takes the initiative, to amend the Constitution of India and establish a tribunal headed by a retired Supreme Court judge or a retired chief justice of a High Court, or some other outside independent mechanism to ensure that disputes with respect to disqualification of members is decided swiftly and impartially.
Or else the menace of MLA defections will continue to haunt India! In the State of Goa the disqualification petitions filed are pending since August 8, 2019 and conceivably due to the coronavirus pandemic and lockdowns of last eyar there have been delay in deciding the disqualification petitions. However, considering the delay, I now personally feel that the very purpose of filing the disqualification petitions appears to be defeated as the term of five years of the present assembly is nearing completion. More so as the next assembly election in the State of Goa is due in April 2022.

(Note: This is the personal opinion of the writer who is a practicing advocate at Mapusa, Goa.)