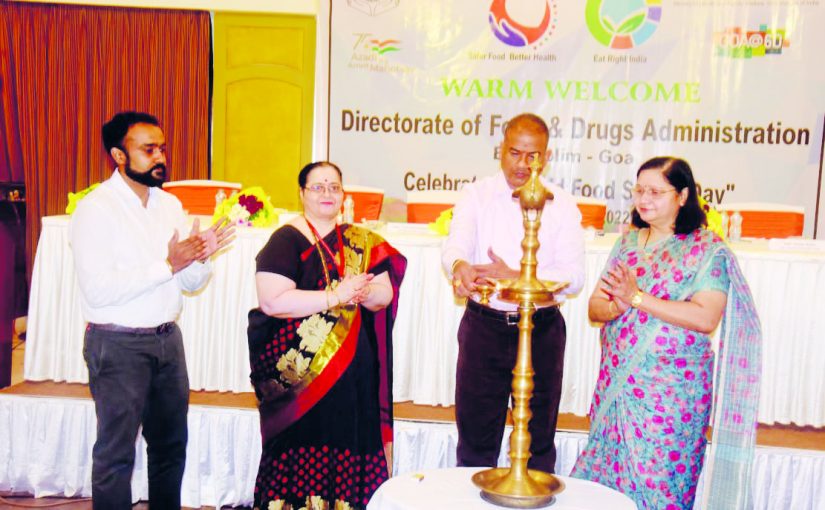 PANAJI: THE FOOD WE EAT IS IMPORTANT! Health Secretary YVVJ Rajasekhar (IAS) inaugurated World Food Safety Day on the theme of “Safer Food, Better Health” in Panaji on June 7, 2022. The function was organized by Directorate of Food & Drugs Administration in celebration of World Food Safety Day. On this day attempts are made to focus on promoting healthy eating habits amongst the lay public. The authorities also draw attention and mobilize action to prevent, detect and manage food-borne risks and increase human health. Speaking on the occasion Health Secretary Rajasekhar said that everyone has a role to play from farm to table to ensure the food we consume is safe and healthy. He urged FBOs to undertake hygiene rating audits. FDA Director Jyoti Sardessai said Goa has been awarded Best Performing State in the Small States Category for the fourth consecutive year. Panaji City was awarded among the top 11 smart cities under the Smart City Challenge and North Goa District has emerged in the list of Top 75 Districts under the Eat Right District Challenge. IEC material, presentation of report of activities and a Doodle Drawing Competition on the theme “Eat Right Goa” was organized for class VIII to X students from various schools. CCP Commissioner Agnelo AJ Fernandes was present along with Director W&CD Deepali Naik, Richard Noronha (Officer, FDA) and other dignitaries.

IN THE demise of Prof Carmo D’Souza we have lost an outstanding educator. As our professor at the VM Salgaocar College of Law he always made time for his students and dedicatedly guided us through the complex labyrinths of law and jurisprudence. His own life he lived very simply and never craved for the material comforts or possessions. This was his greatness.
Prof Carmo D’Souza always had a genuine smile for students. He had a passion for research and shared his wealth of knowledge. It is in the fitness of things that our former Law College Principal Marian Pinheiro has taken the initiative to perpetuate the memory of Prof Carmo D’Souza and we students should rise to the occasion and give our teacher due recognition.
May the life and works of Prof Carmo D’Souza act as a role model to all those aspiring to be teachers! Rest in peace, Sir! We will live up to your expectations and forever cherish the values you impressed on us. I was privileged to be your student.
— Aires Rodrigues, Ribandar

COMMUNIDADE LAND
SIt is clear that the ‘mining’ in Goa is not of the depleted grades of iron ore but the land. On the one hand the Govt. has formed an SIT to enquire into the land grabbing by forgery of dead owners’ signature while on the other hand the Govt. is learning how to usurp land from the communidade by changing the law. Where is the difference between the 2?
The Attorneys of the Communidade must sit together and go to the Court to arrest those seeking to rob the communidade.
Once again I must congratulate those who queered the election pitch by bringing in the TMC and the RGP. Sheer stupidity and total lack of political maturity. These people could not even read the writing on the wall. Three cheers to the Panjim voters who never seem to learn. Goans can only pray now.
—R Fernandes, Margao

TIME FOR CHURCHILL ALEMAO TO CALL IT A DAY
Football in Goa seems to have lost the steam of yester years. The Goa Football Association (GFA) in conjunction with the Goa Football Development Council must do everything possible to uplift the game back to its past glory. We are well past added time or extra time to restore the glory that our popular game urgently needs.
With the GFA to be held soon, Churchill Alemao despite having crossed 70 is desperately and frantically craving to control the GFA for another term. That too having a criminal case against him which as per the GFA regulation Art 27 (f) is a direct disqualification from holding any post.
As the GFA elections in mind, Churchill Alemao has once again raised the bogey about whether the Bandodkar Gold Trophy was of gold or gold plated. While as MLA he had raised this issue in the Assembly and the government decided to order an investigation while Churchill Alemao did nothing to pursue the issue. And has chosen to wake up now on that issue for obvious reasons.
The All India Football Federation regulations and the Model Sports Code mandate that once you attain the age of 70 you cannot continue as President.
For the sake of Football will Churchill Alemao gracefully hang up his boots and make way for someone young and capable with real appeal to lead and take a now sagging football forward. Someone with soccer experience and charm, who is really dedicated to making a difference with good governance, transparency and by encouraging and supporting our youth to enjoy the popular game with a burning passion and desire for success.
Having already had a ball of a time, on what grounds is Churchill Alemao wanting to hang on?
—Aires Rodrigues, Ribandar