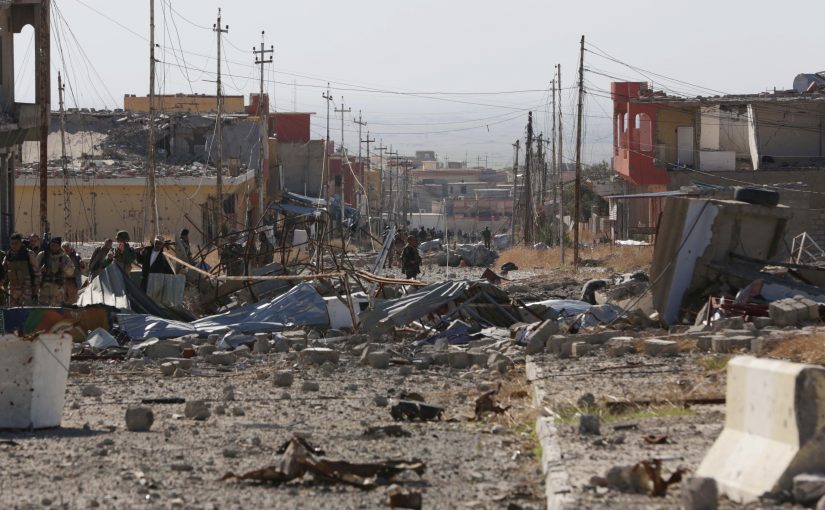 BITTER HARVEST: Refugees are the bitter harvest of all conflicts whether it is the ongoing war in Syria or the American

Quantum physicists have been telling us that reality is an illusion, and that vacuum is far from  being empty. Such puzzling scientific statements seek to convince us that an observer is fooling himself or herself at all times. This YouTube video could help us understand the paradox:

Our ancestors knew nothing of quantum physics, yet have transmitted native wisdom on this point as illustrated in a Konkani proverb: “Dista toxem nasta, dekun jag fosta”. Many of my readers may be more familiar with an equivalent English saying: “Beauty lies in the eye of the beholder”.

All our sense perceptions, such as seeing, hearing, smelling and touching, are meaningful only after they have been filtered through and processed by our brains. The net result is subjective evaluations which can have deadly consequences.

Many decades ago, a grand-aunt of mine, married in Bodiem (Tivim) was leaving her home very early in the morning, before day-break, to water her vegetable garden. She saw a piece of dark-coloured rope  across her path. She flung it away with a stick she carried, but to her bad luck it was a viper that turned back and bit her on the foot. She was dead a couple of days later.

Since recent times, international election observation has become a prominent form of global involvement in domestic polls as a tool of reducing election fraud and ensuring public confidence in the democratisation process. There is evidence that although observers may not eliminate it, they can help reduce election-day fraud at the polling stations they visit.

But one could ask if the observers are more reliable than a CCTV or an extra-terrestrial visitor. While the former can be cheated through clever technical manipulation of the field of camera vision and organisation of an event, the latter can, at the best, view events through different cultural lenses which necessarily colour their reporting. Besides, we all know that elections and apparent fairness of procedures are no proof of a healthy democracy, not even in a country that prides itself to be the mother of all democracies, as we have witnessed in the recent Brexit referendum.

Most western governments which pretend to be models of democracy have administrative rules for transparency, and the EU provides the right of access to documents in its treaties, but reserves the right of discretion to refuse information that it considers prejudicial to national sovereignty and integrity.

A certain Sangeeta Goswami petitioned access to some documents of Migration and Home Affairs of EU, and received the following reply: “Unfortunately you have not indicated your postal address that is required for registering and handling your request in line with the procedural requirements. Please send us your full postal address at your earliest convenience. Pending your reply, we reserve the right to refuse the registration of your request. You may, of course, use directly the electronic form for entering your request: http://ec.europa.eu/transparency/regdoc/…”.

The US has recently been an entertaining showpiece of a strange electoral drama that has left the world baffled by the capacity of a superpower to reduce the democratic rights in elections to a competition of who can hurl the most unlikely dirt against the adversary with the hope of testing the moral credibility of the opponent. Unsurprisingly, the democratic immunity to lie seems to leave no one greatly bothered. A thick-skinned  democratic pachyderm can display resistance against most credible whistle-blowers and hackers.

India has its own rules which include a long list of exceptions and exclusions under Section 8 of its Right to Information (RTI) Act, 2005 that can serve as an alibi for subterfuge and lack of transparency, the traditional fig leaves to hide political nudity. The RTI Amendment Bill proposed removing political parties from the scope of the law, after deferring it to a Standing Committee on Law and Personnel, which backed it in December 2013 in a report submitted to the Parliament. That much in favour of the shy political brides who can benefit from hundreds of crores in tax exemption to perpetuate Draupadi’s curse.

There is the recent phenomenon of cultural observatories which surged in Europe since the late 90s and proliferated across continents. We can be proud of the Goan Observer in Goa, thanks to the courageous private initiative of Pankaj Tara Narayan and Rajan Narayan, committed to serve the Truth without bending to the allurements of money or political parties.

I have known Rajan Narayan, who made himself an “insider” (bhitorlo) to help save the “maim” (bhas) in the thick of the official language storm and struggle for statehood. Rajan Narayan proved his new loyalty to Goan identity. He has all the required credentials to run the Goan Observer, without need to perform as a “fly on the wall”, or adopt any such base pre-swachhata avatar that does not herald a dignified future for Goa and Goans.

The culture of observatories in not new in India. It dates back to early modern times: The East India Company, the British colonial government, and even some native Indian rulers and private individuals had established astronomical observatories for research, such as the Royal Astronomical Observatory at Lucknow in 1835, the Observatory of the Raja of Travancore in Trivandrum in 1837, the Observatory of the University of Bombay by the Raja of Bhavanagar in 1882, moved later to the College of Engineering in Pune. A Jesuit astronomer, Fr Eugene Lafont had set up one at St Xavier’s College, in Kolkata, in 1875. These are only a few among several others. A wealth of information may be consulted at http://bit.ly/2dbzcwg

He says: “This new institution is not aimed at management or control purposes, but for tracking, observing, analysing and providing information. An observatory is a place of negotiation and interactivity. It does not pass judgements.”

The most often cited as the archetypes or best practice manifestations for cultural observatories are: the Observatoire des Politiques Culturelles in Grenoble and the European Audiovisual Observatory in Strasburg. For tragic reasons and disastrous circumstances prevailing in the Middle East, the UK-based Syrian Observatory is nowadays the most cited source of information for the ongoing wars in that region. It presumes to maintain a balanced reporting in the face of the war of disinformation that is part of the counter-strategies of the belligerent nations.

Essentially, observation is the core role, but so is the development and support of collection and analysis of evidence, influence of policy, sharing of insights and building of intellectual capacity through the arts, culture and heritage sector by working across the breadth of cultural domains, including the arts, heritage, tourism, museums, libraries and archives, poverty and disease eradication, and creative industries, meaning those that are not accomplices of climate change or ecocides. None of these areas are free from political and financial implications, which takes us to peeping into the modus operandi of NGOs, the essence of the bourgeois strategy of civilianisation, meaning the “noble” (not very different from the strategy of the Nobel prize for Peace) role of “civil society” as an essential accompaniment of democratic culture.

Antonio Gramsci, the Italian father of Eurocommunism, author of the “Prison Notebooks” (1926-37) which he wrote during his imprisonment under Fascist rule, defined the identity and role of the “subalterns” to break the bourgeois capitalist hegemony. He perceived well the so-called “civil society”, moulded through state-sponsored policies of education, religion and culture to perform in accordance with the bourgeois interests and in a way to make it unnecessary to use visible military force to win submission and support of the citizens.

Gramsci had good knowledge and experience of the Russian communist past and had come to the conclusion that no violent solution for Eurocommunism was possible. Only a counter-hegemony could neutralise the bourgeois hegemony in a European society that differed totally from the Czarist Russia at the turn of the 20th century and success of the Bolshevist revolution. Gramsci concluded that Eurocommunism had to count on the dedication of what he defined as the “organic” leadership of the subalterns.

Civilianisation is these days seen in its true colours. Only the naïve may be fooled with legal lingo or accusations of war crimes, that generally seek to distract attention from one’s own misdeeds by accusing the adversary in violent conflicts of failing to distinguish civilians and non-combatants in war targets. No amount of shedding crocodile tears and discourses of human rights can be a cover to the reality which in these so-called democratic countries is responsible for electing their governments and supporting their political decisions to meddle in the governance of other sovereign countries with provocative alliances and supply of lethal weapons.

The legitimacy for distinguishing combatants and non-combatants ceases when the citizens of a democratic country collaborate in the conflicts declared and promoted by their elected governments, and  as owners and workers in the home industries that sustain the war efforts. Also the women and children of the “good rebels”, treated as such by western democratic regimes that foster “Orange and Green Revolutions” in less developed countries, as is presently the case in Eastern Europe and the Middle East, cease to deserve the benefit of innocent civilians when they eat and sleep with the rebels and provide them a cover against enemy attacks.

The naïve observers and not-so-naïve observatories, often serving as civilian fronts for NGOs, need themselves to be watched, especially if they are recipients of foreign funds. Whether they like it or not, their activities would in most cases cease to be viable without foreign funding, which hardly ever comes without strings attached, without explicit or implicit preconditions. Free lunches are rarely included in the capitalist menu. If many NGOs are linked to religious institutions, they too do not draw their funds from any celestial bank, and cannot function merely by God’s grace,

By way of conclusion, I wish to recall the prophet Jeremiah (5:21) of the Bible and his warnings to his nation: “Hear this, O foolish and senseless people, who have eyes, but see not, who have ears, but hear not.” The observers and the observatories deserve credit if they honestly seek to follow such a prophet in appealing to the foolish and senseless community and national leaders of our times.

But the fate of an honest observer is not likely to be very different from that of Jeremiah, who believed he spoke God’s word. Yet his reward was none but scorn, persecution and near death. In his lifetime he failed to be heard. Posthumously, his predictions of destruction of the kingdom of Judah tragically materialised and thus he became the theologian of God’s punishment, wrath and exile.