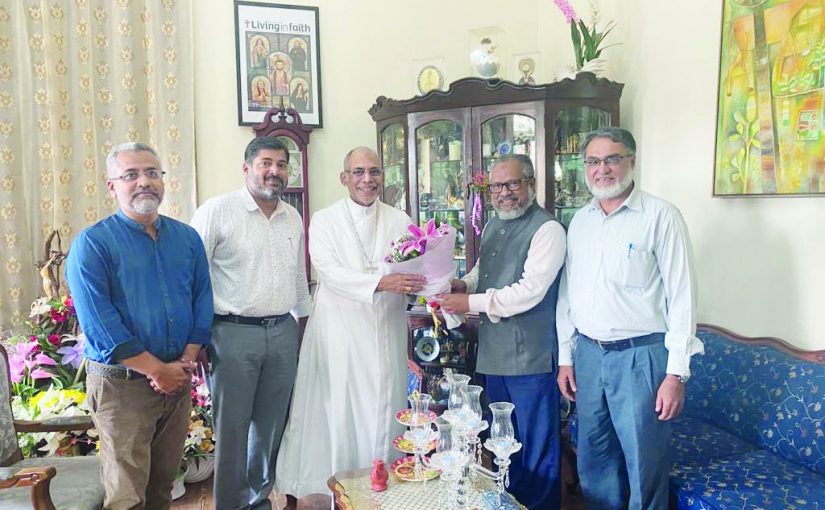 UNITY: All Goans have been living in communal harmony in Goa with the different communities participating in each other’s celebration functions. Besides the Jammat-e-Islami felicitating the new cardinal, the Hindu tradition of anointing special religious icons with oil is still practiced in the Milagres Church Mapusa

The Jamaat-e-Islami of the Muslim community called on Rev Felipe Neri to felicitate him on being selected as a cardinal by Pope Francis. This again dramatizes the tradition of communal harmony in Goa where under the Uniform Civil Code both Muslims and Catholics have to get their marriages civilly registered, before they hold any religious ceremony. Moreover, the divorce laws of Christianity and Islam of annulment of triple talaq are not legal in Goa. The minority community can always get a divorce from the courts.

ON June 4, 2022 the heads of Jamaat-e-Islami Hind Jamath of the Muslim community in Goa called on the Cardinal Felipe Neri and congratulated him on his appointment as a cardinal by Pope Francis. The heads of Jamath reiterated that this was an honor for Goa. This is a unique moment dramatizing the communal harmony that has always remained in Goa. In no other state in the country including Hyderabad, where the 2nd Indian archbishop from Andhra Pradesh was elevated to cardinal’s post, did the Muslim community make such a spontaneous gesture.
Interestingly, the Archbishop from Hyderabad, Poola Anthony, also has the distinction of being the first Dalit to be appointed cardinal. This is part of the policy of Pope Francis to reach out to all the minorities and oppressed sections of society worldwide.
Goa is the only state among the BJP-ruled states in the country which has been free of the scourge of Hindutva fundamentalists. This despite attempts by Chief Minister Pramod Sawant and Power Minister Sudin Dhavlikar who are trying to instigate the majority Hindu community in Goa. Pramod Sawant has not only asked the Archaeological Society to undertake a study of Hindu temples demolished to build churches during Portuguese colonial years, but has even allotted Rs20 crore for the re-building of temples demolished long ago to make way for churches.

FUNDAMENTALIST ASSOCIATES
SUDHIN Dhavlikar is closely associated with fundamentalist organisations like the Sanatan Sanstha which is hunting for shivlings and other Hindu deity idols under the foundation of church property. In this context, it is important to know that the High Court of Allahabad has made it clear that the existence of Hindu idols or images in mosques does not change the character of the religious structure. The Allahabad High Court has confirmed the status of the Gyanvapi structure as a mosque. It is significant however that the Supreme Court has ruled there is no bar in the places of religious worship act which prevents determination of the character of the places of worship.
Unlike in neighboring Karnataka and several other BJP-ruled states there is no ban on the slaughter, transportation and consumption of beef in Goa. On the contrary, beef is the staple diet of the Catholic and Muslim minorities in the country. This is in sharp contrast to Uttar Pradesh, ruled by Chief Minister Yogi Adithyanath, where there have been lynching of anyone suspected from the Muslim or Christian communities to be transporting beef or storing it in their home. Some have been bashed up on suspicion alone without confirmed evidence. There have been similar incidents in Gujrat and Rajasthan.
Many BJP-ruled states have already tabled legislation for a ban on forcible conversions. In Goa also Chief Minister has been talking of introducing a bill against conversion in the monsoon session of the Legislative Assembly. The demand for an anti-conversion bill has intensified with the arrest of pastor Domnic of a certain believer sect. However, the sect is not recognized by the Goa Church and there has been no proof of any forcible conversions. Though there have been reports that many Catholics themselves have been going to pastor Domnic for healing with oils and holy water which he allegedly stocks and sells. Unlike in other states in the country, there have been no reports or any cases of love jihad in Goa. However, there have been voluntarily cases of inter-community marriage, the majority of which have been of the high caste Saraswat community. There has even been an instance of the daughter of a Muslim member of the Goa cabinet marrying the son of a prominent member of the Catholic community. All this was done by consent of both the families and there was coercion involved.

UNIFORM CIVIL CODE
UNLIKE in all of the states of the country which do not follow a Uniform Civil Code, the laws related to marriage and property cover all communities in Goa including the minority communities. Whether it is a Muslim or Catholic couple they have to produce a certificate from the registrar of marriages confirming that they have gone through a civil marriage. Legally, only civil marriages are valid in the eyes of the law. Indeed, neither annulments by the Church nor triple talaq in the case of Muslim couples have any legal value in Goa. Couples married under the Uniform Civil Code in Goa are also eligible for property rights which specify that 50% of the share will automatically go to surviving spouse in the event of the death of husband or wife. There have in fact been demands from other states including BJP-ruled states for enforcing the Uniform Civil Code.
Syrian Catholic writer Shridharan Pillai, also Governor of Goa, in his official address on the 35th Goa Statehood Day stressed on the famed unity of all communities in Goa. The governor held up Goa as a unique example of communal harmony. Curiously, there is now a controversy on how many Hindu Goans fled Goa to Karnataka and other states during the Inquisition. This was in the wake of a statement made by Gyanpeeth award-winning Konkani writer Damodar Mauzo thanking the Kannadiga of Karnataka for their hospitality. There are more Konkani-speaking people living in Mangalore than in Goa! A world conference of Konkani speaking people was held in Mangalore. There are many Goans who migrated to Kerala.
It is not any love or affection or regard for the minority communities which compels the BJP in Goa to keep out the so called “lunatic fringe” groups. When the Vishwa Hindu Parishad organized a protest march from Divar to New Delhi to protest the celebration of the 500th anniversary of Vasco Da Gama’s arrival in Kochi, the BJP did not participate. Similarly, very few Goans including the late Manohar Parrikar, participated in the Ram Janmabhoomi Yatra launched by LK Advani, which led to the demolition of the Babri Masjid.

GOA NON-COMMUNAL
GOA has never witnessed a major communal riot. But more recently there have been clashes between Muslims and Catholics for land for burial for the community, particularly in South Goa. The number of mosques has increased substantially due to the continuous migration of Muslims who account for more than 10-15% of the population now.
It is electoral politics which has ensures communal harmony in Goa. Taken together Catholic and Muslim population account for more than 45% of Goa’s total population. As political strategist Prashant Kishore has pointed out, the BJP cannot win unless the Hindu population in a constituency is more than 60%. The Catholics dominate eight seats in Salcete and the Muslims are also concentrated in certain pockets like Margao, Panjim, Taleigao, Valpoi and Ponda. The BJP is well aware that it cannot get a majority without the support of the Catholic and Muslim communities. So it is clearly electoral compulsions that protect Goa’s communal harmony!