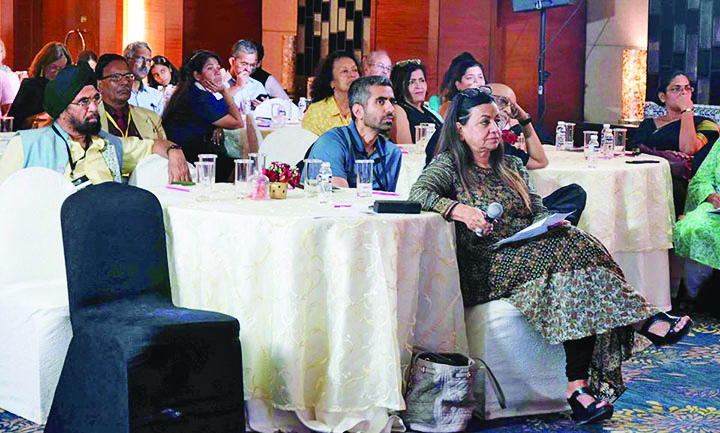 ‘Above the Law’ evening at Taj Vivanta Panaji… Surina Narula recounts the story of why Difficult Dialogues; Italian investigative documentary filmmaker Massimilano Mazzotta…watching his film on polluting oil refineries on southern Sardinia; followed by social evening and dinner at the rooftop restaurant

MEET the UK-based philanthropist extraordinary Surina Narula. She came up with Difficult Dialogues for an exchange of ideas some five years ago and pretty much bankrolls the entire conference. It’s actually a working forum where her team and other players invite experts, policy makers, politicians, lawyers, judges, academics and personalities together to just talk over the troubled issues of our life and times.
This year’s Difficult Dialogues was in partnership with University of Oxford (UK), the Bar Association of India, Centre for Study of Law and Governance at Jawaharlal Nehru University, OP Jindal Global University, PLAN India, PHIA, besides key partners International Center Goa, Goa University and V M Salgaocar College of Law. There was also a most engaging talk titled “Above the Law” by visiting investigative documentary filmmaker from Italy, Massimilano Mazzotta. With his documentaries he blew the lid of oil refineries on the island of Sardinia which impacts the wellbeing of common citizens.
Massimilano organizes an Life After Oil International Film Festival annually and favorite attire is a T-shirt emblazoned with a “Life After Oil” logo. It was this T-shirt, said Surina, which caught her eye during a Paris visit and she got talking to the young Italian documentary maker who has exposed oil refineries and its connections with the Italian mafia and the multibillion petroleum production business which stretches the world over.
For if there are two things our mod con civilization cannot do without it is oil and steel, it goes into everything, even pharmaceuticals and drugs for cancers which are in the first place caused by the employment of thousands of employees in the oil and other mining industries seeking raw resources, also as in the case of iron ore in Goa. He has made a documentary of iron ore mining in Goa some years ago and this was screened at the special entertainment party evening Surina Narula hosted at the Taj Vivanta Panaji venue on February 15, 2020.
Surina Narula introduced the dynamo of a documentary maker to Difficult Dialogues delegates from abroad and Goa, as also special guests and media people. She also revealed why she is so concerned about making the law more sensitive to human issues. It’s a poignant story of how in in 1983 she woke up to the fact that her elder sister Urshia was murdered by her husband in a Ranchi farm house near Delhi, along with their two school going children…so began her family’s search to unravel the mystery of the gruesome murder and to get justice in the Indian courts of law.
She discovered how difficult it is for a young woman to even file an FIR at a local police station! (Do a little homework and read up about the spine chilling pre-meditated murder over Google data, Suresh Chandra Bahri vs State of Bihar…it makes for some horrifying reading, this detailed saga of a murder which is representative of how women are victimized and murdered in parts of India which are still patriarchal and steeped in gender inequality.)
No wonder Surina Narula who spent two years chasing the case between London, Delhi and Ranchi sounds so forlorn even while talking about her sister Urshia, none of them could reach out to in time to rescue her from her nightmare of an arranged marriage. But to cut to the present one understands how her sister’s murder made her wake up to the fact that life is not a rose garden for the many and especially women and children.
So began the challenge to engage herself with children’s causes and to empower women with legal remedies to liberate themselves when families become torture chambers…the rest is history as they say, she looks back with as much pride as pain. Surina Narula has seen it all now first hand in her own family and out there in the real world for those who are women, impoverished, uneducated and underprivileged.
With an ever understanding husband Harpinder Singh of DSC Ltd by her side, she has moved on from being fund-raiser for street children and women’s causes to many more things, her name features on a slew of activities ranging from helping to found the Jaipur Film Festival and setting up the DSC Award of $25,000 for South Asian authors to taking an interest in changing governance for a better world. Thus, also Difficult Dialogues.

During last week’s three-day conference it was difficult to get her to sit down for a conversation, but then she is very much a power woman, a celebrity and much interviewed and featured woman – research a bit and it’s all there on Google. An exciting woman? Of course, I’d say as exciting as Infosys Sudha Murthy. Both ooze with charity of mind and philanthropy when wealth is at their command, to wave a magic wand for the many struggling for inspiration to live.
Surina Narula, from a conservative Sikh family, growing up in Amritsar, married off at the age of 18 years, seeing life in a large, wealthy Sikh joint family in Delhi didn’t quite know what destiny had in store for her but ask her and chances are she would say life has been fortunate and blessed for her.
Alas, her eldest sister Urshia wasn’t so lucky and her sister’s and the childrens’ murder continues to haunt her. One may imagine that what drives her in her social work on behalf of empowering women, children and authors is to a large extent in memory of her sister…the very least she can do is put down money where it would do maximum good.
Like Difficult Dialogues and a host of other causes she pursues. She was with her younger son Unhad and hubby Harpindar Singh in Goa and comes across as someone who likes to travel, meet new people, find a new challenge. In a very brief exchange with me she told me to check out Hunger Games, three books by Suzanne Collins which revolve around life in dystopia (as opposed to utopia), how in a world in which in only two percent call the shots of fortune, life becomes a game of death for the many poor, vulnerable and at the mercy of mammon.
So is today’s India turning into a dystopia? Up to you to decide! Must meet Surina Narula again and anew to carry on this conversation. She counts for something in our times and I learned that her three sons are grown up and life is pretty much on an even roll, perhaps she’s keen on pursuing the challenge of a political career in the UK…not India, never India. I dare say women philanthropists like her would make for better politicians! Happiness is always a tough call for women who have seen too much and suffered the traumas of the soul.

Footnote: A newly made friend from Italy, Cinzia Ghizni who was photographing at Difficult Dialogues told me she had to ask for a tourist visa to make it to India! Along with Massimilano Mazzotta they were hoping to ask the famous Italian journalist Maria Luisa Mastrogiovanni (son of Maltese journalist who leaked the Panama Papers, Paul Caruana Galizia) to speak at this year’s Difficult Dialogues – but he was refused a visa. Journalists from abroad are finding it difficult to get visas to visit India in BJP’s India! They can only make it here if they apply for a tourist visa! However Massimilano Mazzota was here and his documentary film on polluting oil refineries in southern Sardinia was screened, it surely has some lessons for us here in Goa. Take care of your piece of Mother Earth and it will take care of you. Don’t, and it won’t either. Mother Earth is in peril today like never before and she is our only first home.