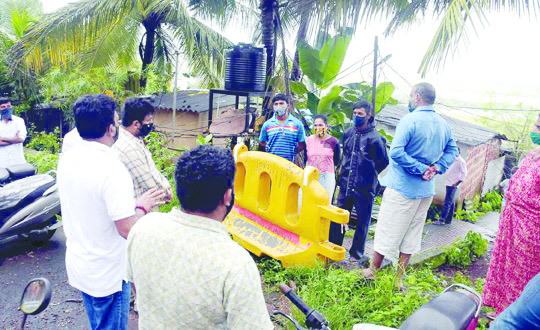 DEATH: Capital city Panaji witnessed its first casuality when a 29 years old young man living in the hutment area behind College of Architecture at Altinho died of Covid-19

AND a few stray thoughts for yet another Saturday. For a Saturday following the week when the first brick was laid for the Ram Janmabhoomi temple. For a Saturday following the week when the Goa State government assured the Supreme Court that it would recover `3,431 crore from mining companies within four months. For a Saturday following the week when the posh Altinho area recorded its first Covid-19 case from the slum colony just behind the College of Architecture. For a Saturday following the week when a revengeful Health Minister Vishwajit Rane removed Dr Ira Almeida not only from her post as nodal officer at the Covid-19 dedicated ESI Hospital but as superintendent of Hospicio Hospital.
And a few stray thoughts on 28 years after the demolishing of the Babri Masjid on December 6, 1992. The then BJP President LK Advani who initiated the movement to demolish the Babri Masjid with his famous Rathyatra from Somnath temple to Ayodhya was ironically not invited to the bhoomipuja function on August 5, 2020. Obviously Narendra Modi does not even want to give credit to the man who brought the BJP to power displacing the Congress. Confirming that the Congress party was also complicit in the demolishing of the Babri Masjid. Priyanka Gandhi Vadra made a statement that Ram was in the hearts of all Hindus. Senior BJP leaders even praised Rajiv Gandhi who was the prime minister who permitted the installation of the Ram lala statue within the Babri Masjid. It would appear that everyone has forgotten the betrayal of the Muslim minority community by all political sections of the Hindu majority. Even as the first brick was laid on the very site where the Babri masjid stood 28 years old cases are still going on against LK Advani and then BJP Chief Minister Kalyan Singh has been convicted.
Let us retrace the events that led to the demolition of the Babri Masjid and the first steps towards construction of the Ram Mandir. All this is based on the claim by BJP leaders that Ayodhya and the site on which the brick was laid on Wednesday housed a Ram temple before it was destroyed by Muslims. The Supreme Court before which the case has been going on for more than a century has not found any evidence that the demolished Babri Masjid was the exact site of the Ram temple. Historians and archeologists have no proof even of the claim that Shree Ram was born in present day Ayodhya. Ironically, the Babri Masjid was demolished when Congress Prime Minister PV Narasimha Rao was in power. The then BJP chief minister of Uttar Pradesh Kalyan Singh had assured both the prime minister and Supreme Court that no harm would come to the Babri Masjid. The only political leader who had the guts to stop the Ram Janmabhoomi yatra and arrest Advani was Bihar Chief Minister Laloo Prasad Yadav.
This was a brief introduction and Lal Kishor Advani marched on and in the presence of other senior BJP leaders including the late Sushma Swaraj, not to mention Uma Bharti and even Atal Bihari Vajpayee. Vajpayee, however felt bad enough to apologize for the demolition of the Babri Masjid! Even though there was a large contingent of the Central Reserve Police Force (CRPF) to ensure that there would be no damage to the masjid, they stood by without intervening while it was being broken. The thousands if not several lakh kar sevak who according to a recent book on the late Manohar Parrikar included not only Manohar Parrikar but his mother who helped bring down the masjid. Photographs of kar sevak climbing up the dome of the masjid and literally hammering it into pieces still remain vivid in my memory.
While the demolition was going on several senior officials and Congress party workers tried to get Prime Minister Narasimha Rao to intervene and stop the act of vandalism. They were told that Narasimha Rao was busy doing a pooja and could not be disturbed. Only after the complete demolition did Narasimha Rao surface to order the arrest of Chief Minister Kalyan Singh and other BJP leaders. The Supreme Court verdict also directed the government to provide five acres of land in the vicinity of the temple being constructed to the Muslim Personal Board to build a mosque. We can take some consolation from the fact that thanks to Covid-19 the bhoomi puja event on Aug 5 was not a grand celebration and number of invitees was limited to 42 persons only.

AND a few stray thoughts on the Goa State government assuring the Goa Bench of the Bombay High Court that it would pass orders to recover 3,431 crore from the mining companies within a period of four months. This was far less than the estimated damage calculated by the Shah Commission which directed that the mining industry should pay35,000 crore. In its latest petition the Goa Foundation has demanded almost double the amount of 65,058 crore for conducting mining operations without being in possession of a mining lease for five years between 2007 and 2012. The SC had cancelled all the 89 odd mining leases and accused the mining barons of defrauding the Goa State government of35,000 crore. Among the charges was extraction of iron ore far beyond the annual licenced capacity. There was hardly any demand for ore and the prices were also very low before China was allotted the Olympic Games in 2008. In its anxiety to make it a magnificent showcase event the Chinese built hundreds of new stadiums with the total complex called Birds Nest for the inaugural ceremony of the games. Not surprisingly China wanted huge amounts of steel for its ambitious Olympics projects.
Moreover, unlike Japan and North Korea which were the main importers historically, China was willing and had the technology to even process ore dust or iron ore fines as they are called. Traditionally, mines in Karnataka and elsewhere produce ore in lumps which command a much higher iron ore content. Given the intensity of the demand and China’s insatiable hunger for ore, the mining companies in Goa exported from 1,000% to 20,000% of the authorised annual capacity. So the Shah Commission considered the ore exported beyond the authorised capacity illegal. This is based on the principle of inter-generational equity which meant that there should be a limit on ore extracted every year so that there is enough left for future generations.
In 1989 the mining concessions granted by the Portuguese government to Goan mine owners were converted into leases as was the practice the country over. The concession holders were given six months to convert their concessions into leases. Many concession holders did not bother to seek leases as mining was not very profitable then. In the wake of the Chinese export boom even mud became profitable! The concession holders belatedly sought conversion to leases. The three chief ministers Pratap Singh Rane, Digambar Kamat and even the late Manohar Parrikar were accused of retrospectively converting the concessions into leases which was deemed illegal. Charges are pending against Digambar Kamat and Pratap Singh Rane and former director Arvind Lolyekar who was suspended for three years. The belated permissions granted by the CMs and the ore extracted during this period was consider illegal. The late Chief Minister Manohar Parrikar ordered a re-evaluation and damage estimated by AC Shah and came to the conclusion that total losses were only `3,431 crore. The plea of the Goa mine owners to extend the lease period up to 2030 was rejected by the SC.
In the meanwhile mining baron and educationist Srinivas Dempo had sold all their mines to the London-based Vedanta Group, while the Salgaoncar group split with the mine holdings going to elder brother Shivanand Salgaoncar. The collateral damage due to the decade long suspension of mining has affected several lakh of people dependent on mining like truck drivers, barge owners, garage owners and even chaiwallah shops as many restaurants catering to mining personnel and workers. The mine owners in turn stopped supplying transport to school students in the villages where the mines were located and also supplying water tankers.

AND a few stray thoughts on senior cabinet ministers being infected by Covid-19. This includes former BJP president and current Home Minister Amit Shah and Petroleum Minister Dharmendra Pradhan. Unlike lesser mortals the two have been admitted to the super luxurious Medanta Hospital run by Naresh Theran. Senior BJP leaders obviously don’t take their own advice as photographs appeared showing Narendra Modi wearing a mask visiting Amit Shah in hospital who despite being infected was not wearing a mask! Several members of the Home Ministry are suspected to have caught the infection too. Amit Shah had to miss the inauguration of the bhoomipuja of the Ayodhya temple on Wednesday because of his infection. In the meanwhile, India has acquired the dubious honor of being the country with the world’s highest number of cases and deaths on Monday. The fresh cases in India on Monday were almost 50,000 compared to 48,000 in the US and 17,000 in Brazil. India also led the world in the number of deaths due to Covid-19 on Monday with 814 causalities behind Brazil (572) and the US (568).
Goa is also seeing a rising toll of Covid-19 cases with Panaji registering its first death of a 29 year-old man residing in the slum colony behind the Goa College of Architecture. The mayor of Panaji Uday Madkaikar is furious because the Health Department did not inform the CCP of the first death in Panaji. A revengeful Health Minister Vishwajeet Rane appears to have decided not to post Dr Edwin Gomes back to the Covid-19 ESI Hospital. His successor Ira Almeida who was also the superintendent of Hospicio Hospital has been removed from both positions. Senior surgeon Dr Deepa Correia has been appointed medical superintendent of Hospicio Hospital now. Dr Uday Kakodkar, associate professor in the Pulmonary Department at the GMC is likely to take over the Covid-19 ESI Hospital. A committee has also been formed to streamline the working of the fight against Covid-19 which includes senior inteventionalist Dr Oscar Rebelo. According to reports in the Herald, Dr Jagdish Kakodkar of Preventive Medicine Department will be the administrator of the ESI Hospital in Margao. The mortality toll in Goa has now passed 60 with over 7,000 cases. The only silver lining is that the rate of testing has improved with pending tests list coming down to 500. It may be recalled that there have been widespread complains about delay in test reports. The faster Antigen tests are likely to be introduced in Hospicio Hospital and progressively replace the present RC-PCR system in other testing centres.
AND a last stray thought on perhaps we have never seen Goa witness such heavy monsoons and in the July and August of this year. There has been almost continuous extremely heavy rain which has worsened anxieties and fears about Covid-19 and treatment.
There have been instances about cars being damaged due to falling tree. Goa seems to be even less prepared for the monsoon than for Covid-19. According to the Metrological Department heavy showers are expected to continue for at least a week more. Paddy fields are flooded and trees uprooted in many parts of the State.
All the repairs carried out on potholes in Panaji city have also been washed away. The biggest surprise is the damage caused to the pride and joy of the late Manohar Parrikar, that is the Atal Sethu Bridge. It is surprising that a bridge executed by as reputed a company as Larsen & Toubro has not been able to witness the fury of the monsoons. Work on the Zuari bridge by Dilip Buildcon is also suspect in view of the disasters that have been witnessed in several parts of the national highway projects assigned to them.