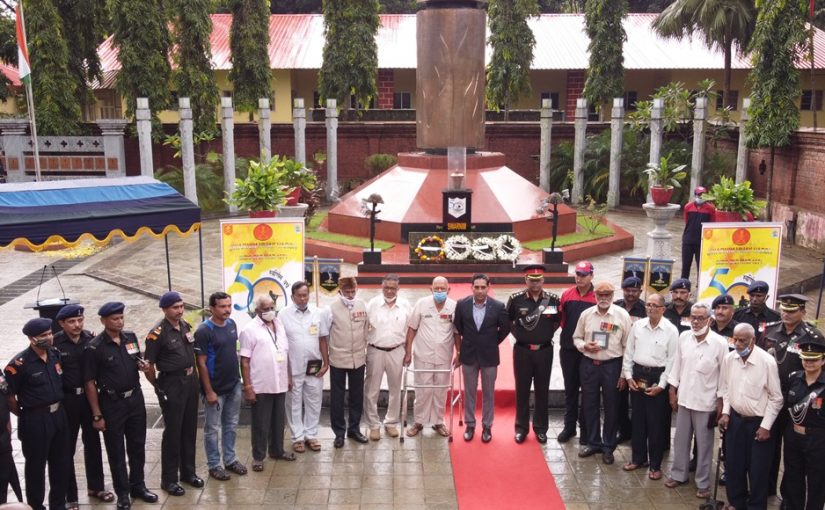 VICTORY FLAME AT KRANTI MAIDAN, PONDA, Goa: The Swarnim Vijay Mashaal was received with full military honours on Sept 15, 2021 during a ceremony conducted by Army’s 6 Technical Training Regiment and 2 Signal Training Centre. The ceremony pays tribute to the 1971 war veterans and it took place in the presence of Union Arts & Culture Minister Govind Gawde, plus prominent officers of the civil administration. A wreath was laid at the War Memorial to honour the brave hearts and this was followed by memento presentation to veterans. Addressing the gathering the minister urged citizens to come forward in support of the armed forces and especially veterans. The Victory Flame now moves on to its next destination before culmination its journey in New Delhi on December 16, 2021

Chief Minister Dr Pramod Sawant, keeping an eye on the upcoming Assembly elections, has now decided to provide free digital meters to all taxi owners in the name of giving them a major relief in Goa.

These same taxi owners have been deliberately blackmailing government after government and refused to install digital meters so that they may continue to loot public arbitrarily and at whim. It has been the case for the last so many years.

Unfortunately now Goa’s CM now seems to be hell-bent on wasting public funds in pampering these same taxi owners for his political survival in Goa. Can’t these well-to-do taxi owners who have looted locals and tourists over the years, buying three to four vehicles within a short period of time, earning good income, even afford to equip their cabs with digital  costing a few thousand rupees? What a big joke on the people of Goa.

Instead of craftily wasting public funds on dubious taxi owners CM Sawant who wants to play at being Santa Claus can seriously distribute some money to youth, including the guys on ships who have lost their jobs since the pandemic started in March 2020 and who currently facing an uncertain future sitting at home with a bleak future before them. Hope better sense prevails.

I GOT an unknown missed call on Sept 6, 2021 from an  organization called CARSEL (as per Truecaller), mobile number 9319977102. I called back and as per Truecaller the call originated from Delhi. I called twice and there was no answer. The next day I received another call, this time from a Pune registration number (+91-2048563199), saying they are calling from CARS24 company.

The caller asked if I was in interested in selling a car and was asked to take it for assessment to Porvorim where company CARS24 operates in a small apartment. There is a Goan who inspects the vehicles and submits his report. Apart from him, there are nine non-Goans of the company working in this apartment. One person  took details from my Aadhar and Pan Card and the details were submitted to their main office in Pune. They told me to wait for half-an-hour and said an OTP type code will be received.

The next day I took my Ford Fiesta, 1.6 litres, for inspection.  The Goan inspector said except for a few scratches on the front headlight glasses, body and steering requiring greasing, the car was in very good condition. After reaching home I received a call from Pune and furnishing the OTP code I was informed  they were offering to buy my vehicle for Rs75,000 (reduced to about Rs73,000 after deduction of their charges).

I said I was not interested as just two years back I was offered Rs4 lakh by Chowgules and I did not accept their offer. September 8 I received a call from the person who inspected the vehicle and he said they have increased their price by another two thousand and now it is  Rs77,000. This time I fired the boy who inspected the vehicle and told him to tell the company person to contact me and told him Goans are not beggars to get fooled by guys operating from Delhi and Pune.

Another call received on September 8 at 12.40pm from Punjab as per Trucaller (+91 9311409937) and they kept trying to get me to suggest a low price. It appears the whole game of buying cars from Goa through this Porvorim shop  is a racket to buy good vehicles cheap and then sell them on for high prices. So Goans please be careful with this Cars24 company and avoid selling vehicles to them!

BE RESPONSIBLE ABOUT CASINOS!

CALLS in Goa to throw open the casinos, cruise ships, hotels “with caution” are rising — based on “2% cases in Goa!” If this is logic, why doesn’t India stop the pulse polio program? Covid is less serious? Two per cent cases in a 15-lakh population in Goa is above states where the same is 10 times higher.

Fact: Business owners hide behind their frontline staff. They act more to violate SOPs then adhere to them. Lockdown parties, weddings with 500 guests for two days when permission is for 50 one day only, and no action against the violators. Goans paid dearly @60 deaths per day when they opened up “with SOPs in place”! The vax wanes after six months. Infections and deaths amongst 10-year-olds to 17-year-olds are high even in neighbouring states. Tourists have no sense conscience or sense of responsibility.

“As Singapore gradually transits to being a Covid-19 resilient nation, society will play an increasingly important role to manage the pandemic,” says the Ministry of Health (MOH) in a media release. “A major aspect is to exercise personal responsibility to self-test and monitor our own health status.” Singapore has fully vaccinated 77.8% of its population. Pre-school and school going students have not been authorised to get vaccinated. So, Singapore is sending all households five DIY antigen rapid test (ART) kits. They have just 57 deaths in the entire pandemic and a population of 66 lakh.

With 90 lakh tourists frequenting Goa’s 15 lakh (with now 2% cases), yes, open up but please do it responsibly with SOPs of self-testing in front of officials at all entry points, and every week of stay with tourists putting on three-layered masks and have got their two vax doses. Tourism is a lazy industry and does not want all this, it is just earning money at the cost of Goan aam aadmi lives and little responsibility!

DO NO TELL LIES!

THOSE in power and authority should be always truthful and never lie. But Chief Minister Pramod Sawant seems to be breaching this with impunity. He has now falsely claimed that Goa is the first State to have ensured 102% vaccination of the first dose of the COVID vaccine. This is far from the truth, it is outrageous for a chief minister to deliberately make such preposterous statements even if he is joking. On Pramod Sawant’s invention of the new figure 102%, we may all have to return to maths classes.

The Chief Minister had the rank audacity to deceitfully declare Goa as Open Defecation Free (ODF) from August 31, 2019. It is over two long years down the road and the very sordid ground reality is there for all to see with people urinating and defecating in the open in fields, hills, riversides… across Goa.

Goans are not fools to be hoodwinked and brainwashed by false facts and figures released by the government. Transparency and good governance at all levels has to be the order of the day at all times!